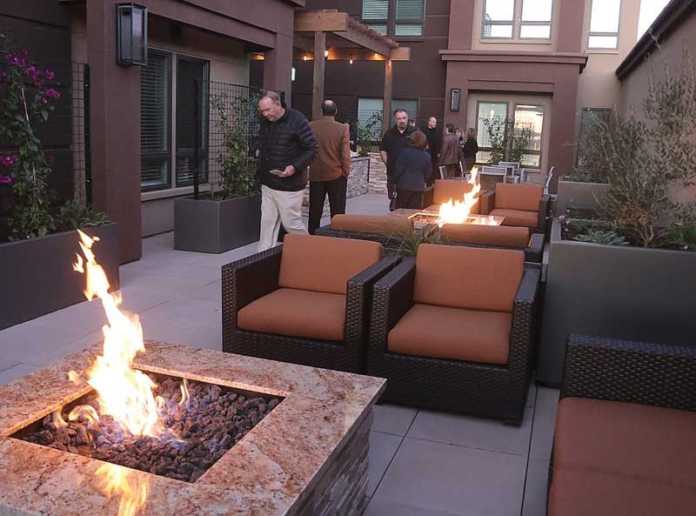 WATSONVILLE — Downtown Watsonville’s newest fixture is The Terrace, a sleek edifice that has transformed the Main Street corridor with several businesses below and 54 apartments above.

A group of Watsonville city officials and business leaders gathered on the building’s rooftop community space Thursday night to schmooze over wine and hors d’oeuvres, and to take part in the ceremonial ribbon-cutting celebrating the end of the construction.

Pajaro Valley Chamber of Commerce & Agriculture CEO Shaz Roth said the new residents — many of whom are out-of-town transplants — are infusing new economic vitality to Watsonville by shopping and dining here.

“I could not be more thrilled or pleased to have this beautiful new building, that has such a diverse group of people,” Roth said. “They are creating a lifetime of memories.”

Watsonville City Manager Matt Huffaker said the building and its associated shops and restaurants are the biggest investment the downtown area has experienced in a decade.

“It will really serve as a catalyst for future development,” he said. “This is a model of what we want for downtown.”

Owner William Hansen said that most of the studios, one- and two-bedroom apartments have already been rented, but said that there are about four two-bedroom places available.

Once every business tenant has taken up residence in several streetside spaces, the selection will include a Togo’s sandwich shop.

“This is a wonderful project that will bring vitality to downtown that has been needed for a long time,” said Watsonville Mayor Lowell Hurst.

Hansen said the construction — from the land acquisition to demolition and then construction — was a “long process,” and thanked project management company Bogard Construction. He also thanked his wife Neva, who he said was responsible for much of the building’s design.