WATSONVILLE—Watsonville Police Sgt. Donny Thul was on patrol recently when he got a harsh reminder of life under coronavirus restrictions.

A call came over his radio that a group of young people was gathered at a park playing soccer.

Just a few weeks ago, such a call would not have elicited a response. But social distancing requirements – and a statewide shelter-in-place order that limits most outdoor activities – makes soccer games a restricted activity.

And so Thul told them to go home.

“It was actually a heartbreaking experience for me, because these kids were out doing what we expect normal youth to be out doing,” he said. “They are not doing anything wrong, they are out being good citizens.”

Thul’s experience is not unique. Law enforcement officials across California are increasingly faced with the reality that they must enforce Gov. Gavin Newsom’s stay-at-home order.

The new restrictions have been a drastic shift for police, who are now tasked with telling people they cannot be outside and businesses that they must close, said Watsonville Police Chief David Honda.

“The whole culture of police work has changed,” he said. “When you think about it, 99 percent of our job is working with people. Building relationships, communicating with people on a day-to-day basis. And encouraging people to gather and have fun, do things that are productive, and working with business owners to create an atmosphere where people want to come.”

Anyone found to be in violation of the order faces possible misdemeanor charges and a fine, but Watsonville police have not yet issued any citations, Honda said. Instead, interactions between law enforcement officials and the public have, for the most part, been informative and amicable.

“I have to give our community credit,” Honda said. “Even though it can be stressful for them to shelter in place and close their businesses, I think the community as a whole gets the picture of why it’s important.”

The threat of COVID-19 infection has also changed the way public servants such as police do their job.

Emergency dispatchers now ask callers whether they or anyone in their residence has symptoms of COVID-19. If they do, emergency responders are instructed to wear Personal Protective Equipment such as N95 masks before entering.

Watsonville Fire Department sends only one person into residences to reduce the number of those who could be exposed.

Watsonville Fire Chief Rudy Lopez said that firefighters have always used PPE when responding to emergencies. But the fast response times often required by emergency workers often doesn’t allow them to put on the gear.

“When there is trauma and peoples’ lives are in peril, you may not be able to get to those questions and be able to suit up appropriately,” Lopez said. “Those we just have to deal with on a case-by-case basis.”

They now must put on more effective N95 masks, and often wear gowns.

Firefighters put more effort and time into decontaminating all the equipment they use, and they clean the fire stations daily.

While Lopez said that firefighters have plenty of PPE gear, that is not the case with the police department, Honda said. Because the PPE must be worn for nearly all calls, supplies are running low, he said.

“Our stress levels are up,” Honda said. “There is a lot more anxiety.”

“The biggest part of that is the unknown,” he said. “We’re contacting people all day long, and many times we don’t know if those people have been exposed or not.”

Police must also consider the possibility that people can be carrying and spreading the virus, even if they aren’t showing symptoms.

“All that is something that weighs on us every day, heavily,” Thul said.

WPD had to close the doors of its Union Street headquarters to prevent people from congregating in the lobby. A sign on the front door instructs the public to use a phone next to the entrance to contact the person with whom they need to speak.

Firefighters arriving for work take their temperature with an infrared thermometer, and anyone with COVID-19 symptoms does not come to work.

“We want to make sure that nobody is showing up to work sick,” Lopez said.

In the event a firefighter contracts coronavirus, WFD has made arrangements to have hotel rooms available, if needed, so they don’t have to self-quarantine at home.

“They are still doing the job they did before, but there is still the stress also of worrying about their families, worrying about our society as a whole,” Lopez said.

Lopez says he sees the added stress and increased hygiene requirements as part of his job.

“We all took an oath, and that oath – that’s what separates us from the general public,” he said. “We took an oath to protect the residents of Watsonville and the greater Pajaro Valley. And with that comes a responsibility to report to duty, when other people might not be showing up for work.  We put ourselves at times in harm’s way, but that’s what we stand up to do. And is it difficult? We’re still human beings – of course, it is.”

Workers with Nor-Cal Scaffolding on Friday morning finish up their work for the first phase of "Watsonville Brillante," a 1,200-square-foot section of...
Read more 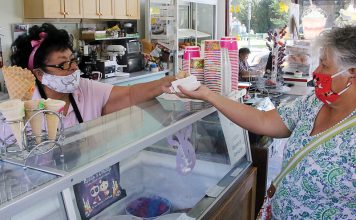