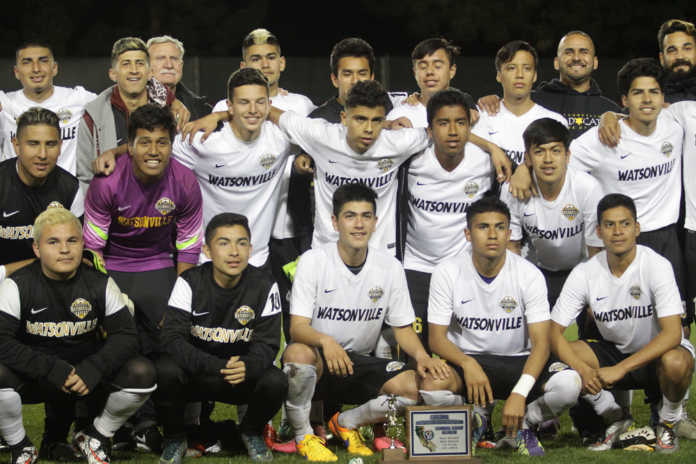 WATSONVILLE — Longtime Watsonville High head soccer coach Roland Hedpgeth was recently named the NorCal Coach of the Year for the 2016-17 season by the California Coaches Association.

It was Hedgpeth’s first time winning the honor, which the CCA will present him during the 60th annual award night on June 17 at the Doubletree Inn in Sacramento.

“It’s an honor,” Hedgpeth said on Monday. “More than anything it says that the talent in Watsonville has been great over the years. That and I’ve had some great assistant coaches. I haven’t done it alone.”

For nearly half a century Watsonville has been a soccer powerhouse in the Central Coast Section, winning 11 section titles and being ranked among the top 20 in the nation on several occasions. This season Hedgpeth’s Wildcatz shook off a rough start to advance to their fourth straight CCS final.
Watsonville senior defender Francisco Gonzales, who was recently named the Pajaronian’s Player of the Year for boy’s soccer, said Hedgpeth was both a good coach on the field and mentor off of it.

“He’s a very good coach,” Gonzales said. “He laughs with us, he plays around with us. We always call him Grandpa Hedg because he always watched over us and makes sure our grades are good.”
Watsonville first year Athletic Director Marcus Northcutt said Hedgpeth’s love for the kids is easy to see.

“The soccer season is only a few months out of the year but he’s always running around throughout the year prepping things for next season, fundraising, taking kids on college trips or working with them for offseason conditioning,” Northcutt said. “Whatever the kids need he’s there.”

Northcutt, who spent more than 20 years coaching football and basketball at various levels before becoming Watsonville’s A.D., said the resume that Hedgpeth has put together over the years is nothing short of spectacular.

“You’re talking longevity and success,” Northcutt said. “He’s conquered both. To me, that’s amazing.”
Hedgpeth said he started coaching soccer before graduating from high school. He and a few of his friends wanted to start a soccer team at Watsonville High and went to Emmett M. Geiser, who was the A.D. at the time, to ask permission. Geiser turned them down but Hedgpeth, who wrestled and played tennis for Watsonville, was not deterred.

“We did it anyways,” Hedgpeth said. “We had a few of the parents help out and what not but we were all really coaching ourselves.”

Soccer was fairly new at the high school level in the area so Hedpgeth said the team would play on the road against private schools from around the Central Coast like Stevenson and St. Francis of Mountain View, while also traveling as far south as Atascadero to play.

Hedgpeth said everything was going well until Geiser read their results from a game against Stevenson in the newspaper.  The team folded shortly after.

But eight years after Hedgpeth graduated from Watsonville High in 1960, the school started a soccer program and two years following its inception Hedgpeth was asked to coach.

Since then, he has been on the sidelines for the Wildcatz in one form or another. In his 38 years as the head coach — he has coached 46 years overall — Hedgpeth, who taught elementry school at Freedom and Mintie White before teaching at Watsonville for seven years, has captured nine CCS Championships and more than 30 league titles.

Next year, he said, will be the final year of his legendary coaching career.

When asked what has kept him going through the years, Hedgpeth simply said the kids.

“It’s always been about them,” Hedgpeth said. “They keep me going. I’ve been doing it a long time and I’ve enjoyed it because of them. I still enjoy it.”

Hedgpeth said he’s kept meticulous notes over the years of what’s worked for his teams and his assistant coaches. He also started keeping track of how his former players have done after high school. He boasts that 70 percent of the kids that have played for him since 1995 have gone on to graduate from college.

He also has plenty of past players that have gone on to work within the Watsonville community. He still sees several of them from time to time and has even coached some of their kids.

“That’s just as rewarding, if not more, than any championship,” Hedgpeth said.