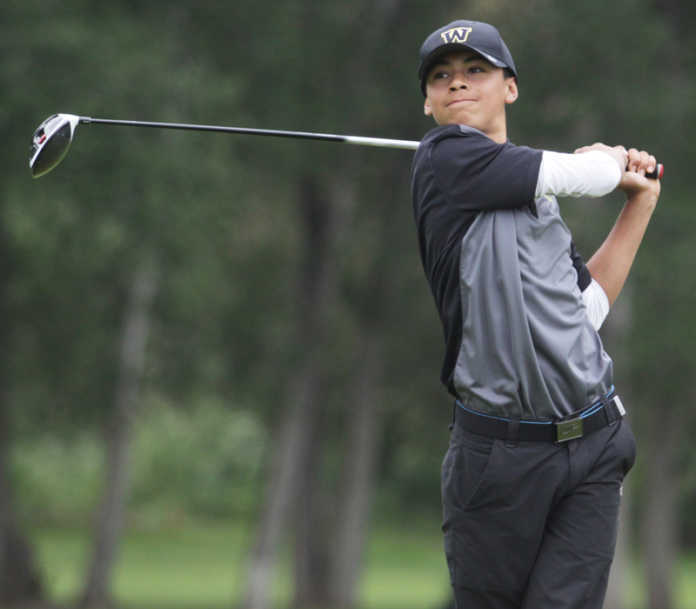 WATSONVILLE — Watsonville High sophomore golf and baseball standout, Maximilian — Maxx for short — Ramirez IV’s father got the kind of call Friday that all parents dread. Ramirez was sick, scared and in the next room.

“When I sat up and tried to get out of bed I fell on my face,” Ramirez said. “I was too weak to stand. It was pretty scared. I called my dad and he helped get me up.”
It turned out to be Rhabdomyolysis, a serious but treatable condition that rapidly breaks down skeletal muscles and can cause kidney damage. Causes of Rhabdomyolysis (or Rhabdo for short) include extreme exercise, dehydration or it can be related to illnesses, among other causes. Ramirez was sick with a serious case of the flu two weeks ago, which is likely to have contributed to his condition.

“When I got the call, I was like, ‘what the heck kid? You’re in the next room!’” said Maximilian III, 50, Ramirez’s father. “He wrapped his arms around my neck and I helped him out to the car. It was scary for us, it was the worst thing.”

On Saturday night he was better and out of the hospital and by Tuesday he was back on the golf course, where he shot a 36 and earned medalist honors in the Monterey Bay League Pacific Tournament at Spring Hills Golf Course in Watsonville.

His quick turnaround exemplified the tenacity that Ramirez has shown throughout his young career and it will be needed as he prepares to defend his spot as the top golfer in the MBL-P at league finals on Monday at Laguna Seca Golf Club in Monterey.

Ramirez went through the scary whirlwind of uncertainty a day after he achieved a statistical oddity on the baseball field. Last Thursday, in a 5-2 win over North Monterey County High, Ramirez started the game on the mound and later reentered when the Wildcatz’s relief pitcher was pulled. He earned the rare win-save combo. It was a big win for Watsonville (14-7, 10-3), which is tied for first with Alisal High in the chase for the MBL-P title.

By the next morning, however, baseball receded into the background.

“The influenza B shot his system and by working through his sickness, like he always would, he pitched against North County that night and got the win and the save,” Maximilian III said. “The next morning he woke up and he couldn’t use his legs.”

The health scare turned out to be just a small setback for Ramirez and it did little to dissuade him from playing the two sports he loves.

Ramirez started playing golf at 4 with his father, who was motivated by the example of Earl Wood’s training of Tiger. By the time he was 5, Ramirez was competing with kids from China, Taiwan and Thailand and by 8 he played in the U.S. Kids World Championships Tournament at Pinehurst North Carolina.

Golf was Ramirez’s sole sporting preoccupation until the allure of baseball caught from neighborhood kids caught his attention.

“He came in one day and asked if he was going to tryouts,” Maximilian III said. “I told him there were not tryouts in golf and he said, ‘no, they’re saying tryouts in baseball.’”

Ramirez caught on quickly on the diamond. He starred at the youth level in the Pajaro Valley Little League and went on to help the Santa Cruz PONY team, which included other current county studs like Glenallen Hill Jr. and Javier Felix, win the NorCal Super Regional title and advance to the West Zone tournament in 2015.

The question of whether swinging a baseball bat has an affect on a golf club and vice-versa is a subject of debate. After years of denial, however, Maximilian III has come to the conclusion that there are indeed some adverse affects and he cites a dramatic .200 difference in average when he’s not playing golf and when he is.

“I know it does. I denied it forever and I kinda instilled the denial in Maxx,” Maximilian III said. “However, I believe we both know it does affect him. It affects his batting average and his scoring on the golf course. When his golf swing is going great it tends to make his swing in baseball go from the bottom, up, which tends to make him hit more fly balls. It’s tough to get back to a level swing when he needs to concentrate on doing the opposite in his golf swing.”

Despite the challenges of being a two-sport athlete, Ramirez has achieved success in both sports. As a freshman, he was named the MBL-P’s Most Valuable Player of the Year after firing the lowest score of all Pacific division golfers at league finals and advanced to the Central Coast Section regional tournament. Despite only being a sophomore at age 16, Ramirez had 11 years experience playing golf. He said he still wants to test his limits.

“He’s been playing for a long time, he has lots of tournament experience, but he’s like other young golfers who want to see how long they can hit it,” Watsonville head golf coach Gary Yoro said. “He can hit the ball just as far as anyone else but I want to teach him when to hit it.”

Love of the game kept Ramirez on the baseball field and after starting on the junior varsity team was a freshman, he has made an early impact at the varsity level.

“He’s a battler,” said Watsonville head baseball coach James Gomez. “When he’s on the mound he just goes after guys. He’s a bit undersized and he’s only a sophomore, but he’s just like a bulldog. He’s a great pitcher but he’s also a really good shortstop who’s made a lot of clutch plays to kill rallies.”

On the mound, Ramirez throws a fastball, changeup and curveball with good velocity but also has the ability to change velocity with his off-speed pitches.

Since his time is split between the baseball field and golf course, Ramirez has maximized his limited practice time to continuously get better.

“Sometimes he just has to miss practice because he’s golfing,” Gomez said. “We need to make sure that he’s successful doing both. We try to make sure he gets his work in.”

Gomez agrees that playing baseball and golf is difficult for Ramirez and that it probably affects him adversely. But, Gomez said, Ramirez is somehow making it work.

“I assume it hurts his golf swing a little bit by swinging a baseball bat since they’re a little bit of different motions,” Gomez said. “I think that doing the repetition of both probably confuses his brain a little bit. There are times when we need to make sure he’s not doing a golf swing when he’s swinging a bat and I assume he’s probably batting with that on the golf course as well. But, they both involve hand-eye coordination and he’s really good at that.”

BRYCE STOEPFEL - August 11, 2022
Two local artists have teamed up to create a memorial sculpture honoring Watsonville residents who have died of Covid-19, and are asking for the...