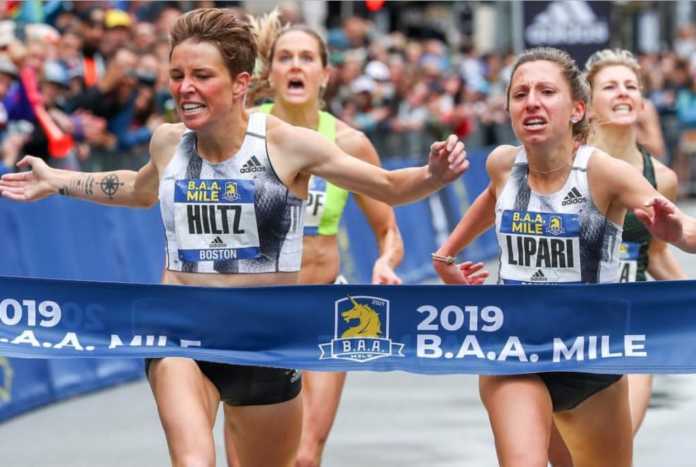 Aptos’ Nikki Hiltz won the gold medal in the 1,500-meters after she finished in 4-minutes, 07.14-seconds on Saturday at the Pan American Games in Lima, Peru.

Hiltz sprinted for victory at the Athletics Stadium of Villa Deportiva Nacional just ahead of Jamaica’s Aisha Praught, who won silver in 4:08.26. American Alexa Efraimson took the bronze in 4:08.63.

Hiltz’s top finish was the second gold medal won by a Santa Cruz County athlete in this year’s Pan Am Games. Karissa Cook, a Harbor High alum, won one in beach volleyball during the first week of the games.

Hiltz began the race at a steady pace, hanging out in the back of the pack for the first two laps. She slowly started making her way up to the front and found herself sitting in third with about 200 meters to go.

Hiltz turned on the afterburners just after the final turn and pulled away for the lead. She sprinted down the straightaway for the gold.

Hiltz entered Friday’s race as the heavy favorite after she ran a season- and personal-best time of 4:03.55 on June 27 at the USA Track and Field Outdoor Championships in Des Moines, Iowa.

Hiltz, an Adidas runner now based out of San Diego, earned a spot on the USA team at the IAAF World Championships in Doha, Qatar, on Oct. 2-5.

Johnson wins Aptos Challenger >> The 32nd annual Nordic Naturals Challenger featured a pair of exciting championship matches over the weekend, including a singles final that featured two players seeded in the top 5.

It was the first meeting between Johnson of Redondo Beach, Calif., who was recently bumped up to No. 79 in the ATP World Rankings, and Koepfer, who moved up nine spots to No. 113 in the world.

Johnson dominated at the beginning of the first set by breaking Koepfer’s service game early to take a 3-0 lead.

Johnson continued to play strong to win the first set, 6-3.

The second set was a different story. The nerves settled as both players held serve and played close throughout.

Koepfer took the second set into a tie-breaker but Johnson prevailed.

Prior to that, the day began with the doubles final, which included Americans Nathan Pasha and Max Schnur, who signed up as an alternate team.

The Americans came up short against the top-seeded doubles team of Marcelo Arevalo of El Salvador and Miguel Angel Reyes-Varela of Mexico.

Pasha and Schnur were already in the area to practice against the No. 1 seed when they found out a spot opened up in the doubles tourney.

Leander Paes of India and Max Purcell of Australia withdrew from the tournament, which allowed Pasha and Schnur to take the open spot in the draw.

Pasha and Schnur won three rounds to get to the finals. Then in a funny turn of events, they ended up playing their practice team for a doubles championship.

Pasha and Schnur gave the top-seeded duo a run for its money after they won the first set, 7-5.

But Arevalo and Reyes-Varela bounced back in the second set and followed up by winning the tie-breaker.