Wheels for wings at Watsonville airport | About Town

Joseph Keeler, 28, of Watsonville made his first court appearance Tuesday in Superior Court in the company of public defender Diana August. He faces a murder charge for allegedly stabbing his 26-year-old brother, Christopher, to death Friday at their Green Valley Road home.

A huge volcano has erupted on a deserted island off the coast of Ecuador.

Outdoor Supply Hardware, a general hardware, power tool and garden supply chain store, opened in the first week of January in the former Orchard Supply Hardware store in King Plaza at the corner of 41st Ave. at Capitola Road in Capitola.

A major paint job for the exterior of the Watsonville Woman’s Club got under way Monday, thanks to the long-standing painting company Master Painting. Mike Masters said the task will take a couple weeks, weather pending.

Today I walked past the former Teen Challenge Monterey Bay thrift store on Brennan Street (in the former car dealership of years past). They are closed and huge sheets of paper cover their windows. A sign in the window reads: “This building will soon be transformed into a 94-bed facility that will provide shelter for homeless women and children as well as Teen Challenge Monterey Bay students.” We will do the research and run a story about the huge development.

I stopped by the watsonville Certified Farmers Market today, my first such visit in months. While I was glad to see the market up...
Read more
About Town

A sunset scene | About Town

I covered a shooting in Santa Cruz yesterday by Dominican Hospital. Witnesses said it was a young Latino male. They said they heard three...
Read more
About Town

I spoke with the National Weather Service today and a meteorologist told me that a long dry period was about to settle over our...
Read more 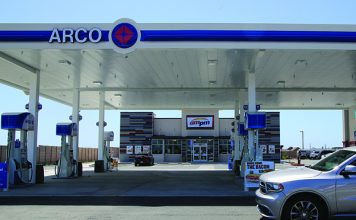