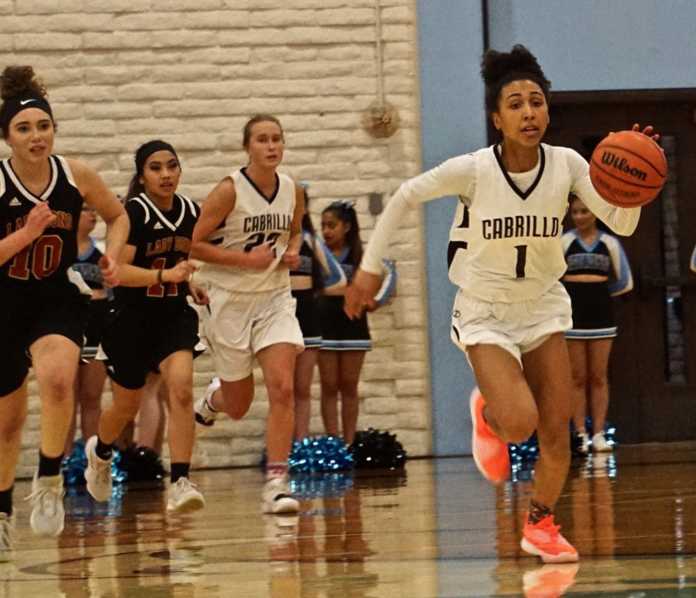 There is something bittersweet about the grand finale of a county fireworks show. It’s brilliant and intense, but as the last bursts fade there is sadness in knowing it’s over.

That is exactly what sophomore night resembled for Cabrillo College.

A fireworks display designed to showcase the very best local ballers from around Santa Cruz County one last time.

All four sophomores on this year’s squad grew up and attended school locally with the exception of Heleyna Hill, who attended Archbishop Mitty in San Jose but grew up in Santa Cruz.

A vocal crowd filled with family, friends and peers was treated to an equally superb demonstration of team offense and defense, as Cabrillo players executed on both ends of the floor with the precision of a well-rehearsed performance in the Adobe Palace on Feb. 15.

In a game in which a Seahawks’ win appeared inevitable after the first quarter, Cabrillo’s (17-4, 10-1) deep and talented group of sophomores put on one last home show against the De Anza College Dons (4-18, 3-8) en route to an 82-39 victory.

That isn’t to say the Seahawks fireworks show is over, there is still one last regular season game to be played tonight at Mission College (16-9, 11-0) in Santa Clara.

At stake in Santa Clara, is a potential share of the Coast Conference South title and seeding in the upcoming state tournament.

Tipoff is scheduled for 7 p.m.

On Feb. 15, Hill exploded to register a near triple-double, Maddy Miller rocketed shot attempts in the paint away, Nthabi Anderson-Bahr crashed the boards and Teal Maixner popped and dimed to set everyone else up.

The Seahawks steadily pulled away and allowed 10 or fewer points in three quarters following the first. The Dons average 51.3 points per game, but where unable to find their way through the suffocating Hawks’ defense anchored by center Miller and forward Anderson-Bahr.