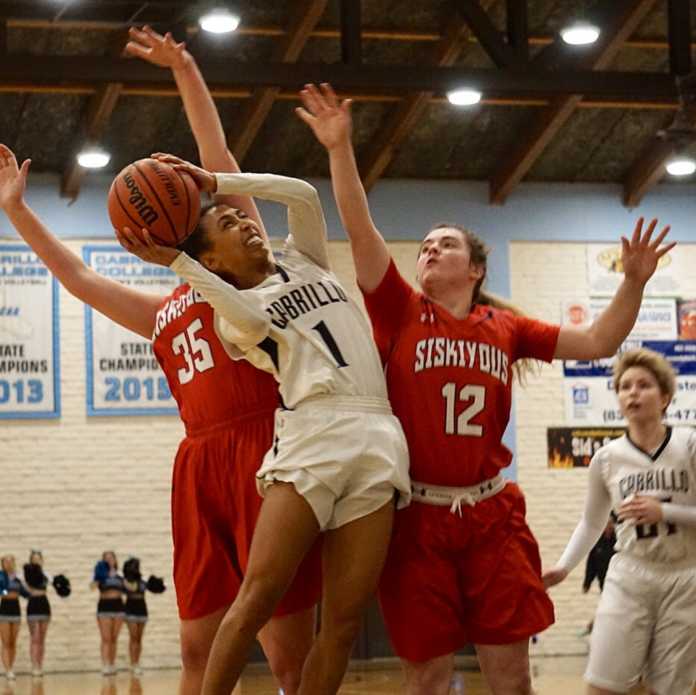 Ever danced with a Blue Devil in the pale gym light?

No, this isn’t a comic book movie. It’s the Cabrillo College women’s basketball 2018-19 playoff run, and things are about to get very interesting.

After defeating the No. 11 seeded College of the Siskiyous on March 2 in the Adobe Palace, Cabrillo has progressed to the third round of the NorCal CCCAA playoffs for the first time since 1979. Now, armed with the Coast Conference South MVP and Coach of the Year, the No. 7-seeded Seahawks will face their greatest challenge so far when they travel to the Central Valley to play against the No. 2-seeded Merced College Blue Devils.

The Blue Devils (27-3), who split the Central Valley Conference title with the College of the Sequoias (27-3), boast a potent offense (85.9 points per game) and a staunch defense (53.8 points per game) that defeats opponents by an average margin of 32 points.

All of Merced’s losses have come against teams ranked in the top five in the state.

The Blue Devils’ leading scorer, freshman guard Malaya Kendrick, accounts for 16 points and three assists per game. Kendrick may produce seven points less per game than her Cabrillo counterpart Heleyna Hill, but Merced’s star guard has had more help than the Seahawks’ future NCAA Division II player. Every member of the Merced starting five scores 10 or more points per game. The Blue Devils also have excellent ball movement, as Kendrick is one of four players on the roster to average at least three assists per game.

Since arriving in Aptos this season, Hill has been one of the most prolific scorers in the state, averaging 23.5 points per game.

After Butte College laid out a blue print on Dec. 22 for how to contain the dynamic scorer with what amounted to a box-and-one defensive strategy, Hill, a Dominican University commit, adapted by pushing the ball out to her teammates in the early stages of the game.

A rising tide lifts all ships, and with the increased ball movement on offense other members of the Seahawks’ squad saw rises in their scoring production numbers, which in-turn forced opposing defenses to spread back out.

For sophomore center Maddy Miller, the match up with Merced freshman Jada Johnson will be head and shoulders above what she is used to. Both centers stand 6-feet tall, and both have been hot, averaging nine-plus points and rebounds over the course of conference play.

Miller has a distinct edge in shot-blocking ability but none the less will have her hands full guarding Johnson, who’s the much more capable scorer.

In the second round, Merced sunk the No. 15-seeded Santa Rosa Junior College Bearcats, blowing them out by 35 points behind a volley of 3-point attempts (34). Sophomore guard Ayaka Nakashima led the barrage going 7-of-21 from deep for a game-high 21 points. It was the fourth time this year Nakashima has dropped 20 or more points in a game.

Cabrillo just weathered a 3-point bombardment in last week’s match up, as Siskiyous’ sharpshooters managed to keep their six-player roster in the game until the closing seconds. The Seahawks hope to learn from that experience, and will look to take away space from the Blue Devils to disrupt their timing and comfort on deep shots.