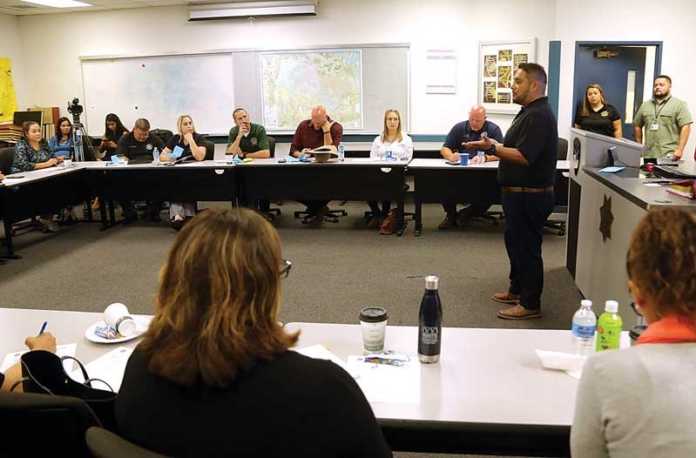 WATSONVILLE — One year ago, members of the probation department from the Pinal County Sheriff’s Office in Arizona travelled to Watsonville to visit the city’s police department and study its successful programs that target youth crime.

They returned home with such a glowing report that Pinal County Sheriff Mark Lamb returned this week with a new contingent of representatives from his department.

During the two-day visit, the visitors are learning about Caminos Hacia el Éxito, a diversion program for first-time, misdemeanor offenders.

They are also learning about the WPD Cadet program and one that places resource officers in schools.

In addition, they are hearing from Pajaro Valley Prevention and Student Assistance, the Watsonville Police Activities League and the Santa Cruz County Teen Peer Court.

Lamb said he is hoping to bolster his own services and create a “proactive” program in Pinal County.

He said that he was surprised at the sheer number of programs available here, and at the numbers of people dedicated to helping young people across Santa Cruz County.

“Watsonville is well ahead of the curve,” Lamb said. “It’s been amazing to see it.”

Watsonville Police Chief David Honda said the countywide efforts are important because of the numbers of young people who call Watsonville home.

According to Honda, about 30 percent of the population here is 19 or younger.

If law enforcement officials want to be successful in stopping youth crime, programs must be geared toward young people, he said.

“We can’t arrest our way out of the problem,” Honda said. “The only way make a difference in the lives of these kids is to engage them on a personal level.”

Honda called the visit “an honor,” and said the department has also garnered interest from police departments in Arkansas and Nebraska.

But Honda was quick to share WPD’s successes with the other organizations that also target troubled youth.

WPD’s success, Honda said, comes thanks to a countywide effort that includes United Way, the county’s probation department and the Community Action Board.

“Santa Cruz County is a model jurisdiction, and I’m glad to be a part of it,” Honda said.