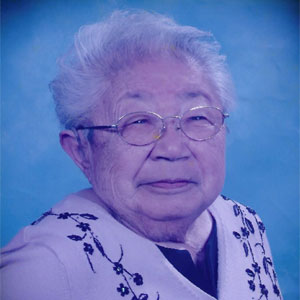 Yoshiye “Yo” Kaita passed away peacefully at home on Wednesday, April 26, 2017 at the age of 95.
She was born on July 11, 1921 in Fresno to parents Hikoichi and Yaeko Tara.  She was the oldest of the five daughters.  The family lived in Fowler and Selma in the Central Valley.  Yo graduated from Selma High School in June 1940.  During World War II in 1942, the family was interned in a relocation camp at Gila River, Arizona where Yo worked as a teacher’s aide.  Yo met her husband to be, Kiyomi (Kay) Kaita in camp and later married on August 21, 1943.
Yo was preceded in death by her husband of 69 years, Kiyomi; her parents and stepfather, Saburo Oda; her sisters Chiyeko, Toshi (Tsudama), and Fudge (Sasaki); her brother/sister in-laws: Tokii/Chiyoko (Kaita) Fujii, Roy Kaita, Taira/Yaeko (Kaita) Fujimoto, Minoru/Minnie (Kaita) Tao, and Tom/Aya Kaita.   Yo is survived by her six children: Judy (Shig) Tokubo, Maxine (George) Nakamura, Elaine (Gino) Abad, Louise (Lyman) Lum, Barbara (Bob) Shingai, and Bruce (Jeri) Kaita; her sister Emi Kaita; twelve grandchildren, sixteen great-grandchildren and many nieces, nephews, grand nieces and grand nephews.
Yo was a member of the Watsonville Buddhist Temple and Watsonville-Santa Cruz Japanese American Citizens League (JACL).  She was a wonderful cook and enjoyed sewing, handicrafts, ikebana and bonsai.  She, like her husband, was an avid bowler in her day and enjoyed traveling.  Most of all, Yo enjoyed her extended family as family gatherings were very special to her.  She will be remembered for her quiet demeanor, gentle smile and her soft hand wave.  She will be truly missed.
A memorial service will be held on Friday, May 19, 2017 at 11:00 a.m. at the Watsonville Buddhist Temple, 423 Bridge Street, Watsonville, CA.  Arrangements have been entrusted with Mehl’s Colonial Chapel.
In lieu of flowers, donations in Yoshiye Kaita’s memory may be made to the Watsonville Buddhist Temple, 423 Bridge Street, Watsonville, CA or Hospice of Santa Cruz County, 940 Disc Drive, Scotts Valley, CA  95066.