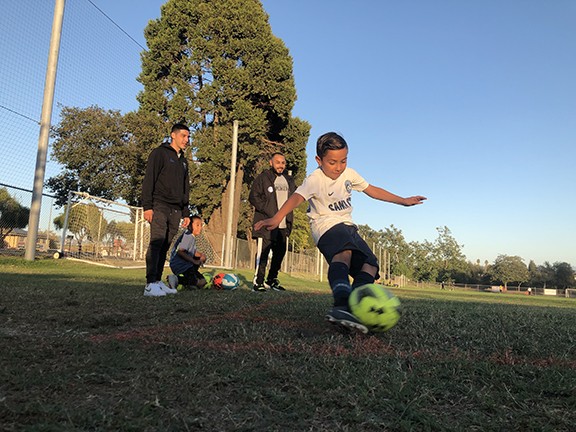 WATSONVILLE — The Watsonville Breakers Youth 10 soccer club held its usual practice on Tuesday at Ramsay Park as it does every week.

But this was no ordinary practice.

The kids got to partake in a once-in-a-lifetime experience they’ll will probably never forget.

San Jose Earthquakes midfielder/forward Cristian Espinoza made a special visit to the Breakers’ practice to spend time with the youngsters on a field that coach Andy Anaya once played on as a kid.

“I don’t know who’s more excited, me or the kids,” Anaya said. “I’m just really excited because I used to play here when I was 7 years old, this exact field.”

Anaya’s son, Drake, was one of 12 players from the Breakers who got a chance to practice with Espinoza.

“It was really cool,” said the 9-year-old. “It felt like we were mini-pros and he trained us a lot.”

Anaya attended an Earthquakes’ practice about a month ago when he entered the Breakers in a contest to spend a day of practice with a player from the team.

Out of 70 entries, the Breakers were randomly selected.

Anaya, who’s been a San Jose Earthquakes season ticket holder for the past four years, said he received an email from a team representative to inform them they’d won.

“I was like, ‘Wow, that’s really cool,’” said Anaya with a big smile on his face.

The Earthquakes told Anaya to pick a date and select five players he’d like to show up.

To his surprise the Earthquakes chose Espinoza, the player they were hoping for.

“That’s the one we were expecting because he’s doing so good. It’s his first year playing with (the Earthquakes),” Anaya said.

Espinoza also happened to play for one of Anaya’s favorite teams in Argentina, club Boca Juniors of the Argentine Primera División.

Drake said he definitely thinks practicing with a professional player will help the Breakers in their upcoming games.

“We should probably get better with him (helping),” Drake said.

When Espinoza arrived, he made his way through the gates and walked toward the Breakers to make a brief introduction.

At first, the kids looked a bit hesitant or maybe stunned, that a Major League Soccer player was standing on the same field as them. But then the young players seemed to come at ease once they got going.

Espinoza first stretched out with the team and then watched the kids partake in footwork drills using agility ladders. He then participated in a shot drill, followed by a corner kick drill and even played in a short 15-minute scrimmage.

“It was very nice and special to me,” Espinoza said. “Like I was telling coach (Anaya), I was in the same position these kids are in and I had the chance to train at different spots.”

Espinoza said having the opportunity to share his time with the kids is something he hopes is a positive impact.

“It’s something that I hope keeps them motivated so they can accomplish that dream of becoming a professional soccer player,” Espinoza said.

Espinoza said his favorite part was being able to play a quick game with the children, which he mentioned gave him some flashbacks of being back in Argentina.

“A lot of nice memories of when I was young and I’m grateful for being here with (the Breakers),” Espinoza said.

“It was cool how we were able to have him walk around and help us play,” Drake said.

Anaya, 28, was born and raised in Watsonville and has never been this close to a professional soccer player.

“Now my kid (Drake) plays and (Espinoza’s) coming to us where I make these guys practice and train so hard,” Anaya said. “We talk about being professional soccer players all the time. Just being able to have one here is a dream come true for everybody.”

Manny Garcia, a 9-year-old from Watsonville, has been playing competitively for three years and said it was really cool to have Espinoza attend Tuesday’s practice.

“It made us feel like professional players,” Manny said. “So, I think we’ll get better with this and become better soccer players.”

Manny said his favorite part was also the scrimmage, where he had a chance to go up against Espinoza on several occasions.

Espinoza, who is from Buenos Aires, was acquired by San Jose on Jan. 2 from Villarreal on a season-long loan. He has a team-high 12 assists and has recorded two goals.

Prior to that, Espinoza made 17 appearances for Boca Juniors in 2017. He contributed two goals and two assists.

Espinoza climbed through the youth ranks at Huracán before making his professional debut at 17. He recorded 11 goals and 11 assists in 53 appearances before being acquired by Villarreal.

Espinoza made 18 appearances in La Liga action for Alavés and Real Valladolid where he tallied three assists during his time in Spain.

Espinoza also led the Argentina U-20 to a 6-1-1 record in the 2015 South American Championship. He’s had a short but tremendously successful career.

And like many of the kids on the Breakers, Espinoza said he began playing soccer at a very young age. He mentioned it all started with kicking and passing the ball as young as 3-year-old.

Drake said began playing soccer about four years ago and said he has dreams of playing someday on one of his favorite teams, which are Club América of the Liga MX in Mexico or Juventus of the Serie A league in Italy.

“I like playing soccer because I get to have fun and I’m not always in the house, not always on electronics and I get a lot of exercise,” Drake said.

Espinoza said that’s the type of message he was hoping to deliver when he spoke to the team before and after practice. He advised the young players he was once in their shoes and always dreamed of being a professional soccer player.

“Thanks to hard work and dedication, I was able to get there and every day I’m enjoying that opportunity,” Espinoza said.

Espinoza said he recalls when professional players in Argentina visited the camps and practices he attended. He said it was a nice thing for them to do, and that it motivated players to move on to that next level.

“It’s important, at least for me because I like to share these moments with the kids and being able to get on a pitch to watch the way they have fun,” Espinoza said. “It’s something very nice because thinking back on all the things we sacrificed to become a pro we also can’t lose that happiness to get on the field.”