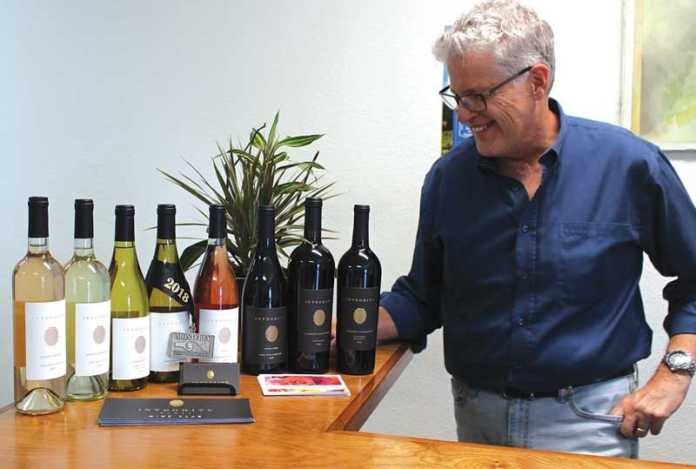 ABOVE: Mark Hoover of Integrity Wines shows off the winery’s selection, including their Santa Lucia Highlands Chardonnay, which won silver at the 2018 Montery Internationsl Wine Competition. (Johanna Miller/Pajaronian)

WATSONVILLE — On a 2014 wine tasting excursion to Murphys, known to many as “Little Napa Valley,” Mark Hoover and his wife Gail noticed something strange.

While there was some wine they enjoyed, and others they found decent, many were not as high-quality as expected — and yet, the prices remained the same.

“It was inconsistent,” Hoover said. “And when standards dropped, they were still charging about $30 a bottle.”

After making their way back to a favorite winery and settling in, Hoover began brainstorming.

“I sat there with a glass of Zinfandel and thought, ‘Hey, we could totally do this,’” he said.

Hoover had been in the amateur winemaking game since 1981. Off and on for 30 years he practiced, learning as much as he could — including taking wine courses at UC Davis.

Once the idea of going commercial with his wine was formed, Hoover met with a group of friends to explain his experience at Murphys and what he wanted to do.

In 2016, Integrity Wines was established, Mark and Gail Hoover teaming up with Eric and Luciana Silverman as co-owners. They eventually found a small space at Watsonville Municipal Airport for winemaking and occasionally public wine tasting.

Hoover, whose family has been in Santa Cruz County for generations and lived in Watsonville in the late 1980s, said initially it was availability that drove them to come to South County. But what’s kept him here is the community itself.

Which is why Hoover hopes to keep Integrity Wines as local as possible.

“We are looking for a bigger space to eventually move into,” he said. “Our parameters are only that we don’t move outside of the City of Watsonville.”

Integrity Wines sources its grapes from various local vineyards across the region of California. This was intentional, according to Hoover, who admitted they were not interested in becoming farmers.

“It’s a whole other world,” Hoover laughed. “We work with some amazing growers, who look at what we do and say, ‘We’re so glad we don’t do this!’ Well, it’s the same for us.”

Even without the farming aspect, starting up and maintaining a winery takes dedication — something that Hoover has felt acutely in the two years since Integrity opened. Everything from the changes in winemaking technology and acquiring the right permits, as well as licensing itself:

“You can’t even submit your paperwork to get licensed until you have a permanent address for the winery,” he said. “The process takes months and months.”

Integrity was first branded as “12 Hands Winery” for the six partners who initially formed the business. Even after the name change, the owners wanted the theme of partnership to continue. And this included recognizing its customers, too.

The winery’s logo, a golden thumbprint design, was designed to reflect this.

“People always ask if it’s my thumbprint,” Hoover said. “And I respond, ‘No, it’s yours!’ There are a lot of people involved in making this business work — and the customer is one of those people.”

Integrity Wines can be found for sale at various local stores and restaurants, including neighbors Ella’s at the Airport, as well as online at integrity.wine.

Wine tasting is held Saturdays and Sundays from 12-5 p.m. at the winery, 135 Aviation Way, Suite 16, and throughout the week by appointment.