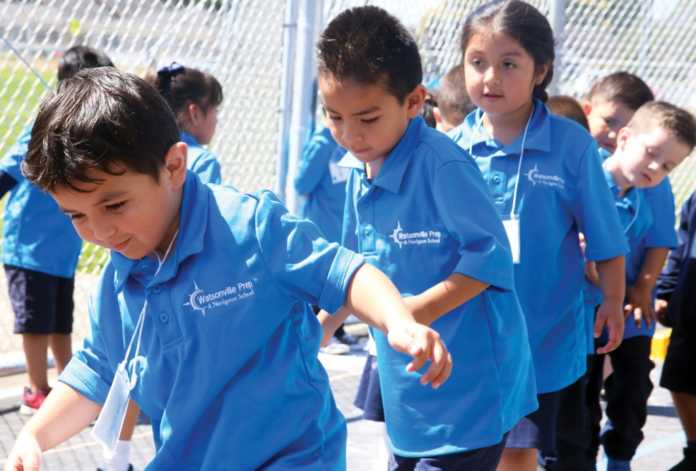 Watsonville Prep School, which is run by Navigator Schools, held a ribbon-cutting ceremony Friday, an event attended by parents, students, teachers and administrators.

“We are so very excited that the day is here, and that Watsonville Prep School will be welcoming 180 students to our campus,” said Director of Community Outreach Kirsten Carr.

A total of 210 students applied for the lottery to join WPS.

The school plans to add one grade per year until it has an eighth grade. The school’s charter calls for a total of 420 students when fully operational in 2023.

Under California law, a school district must provide a space for charter schools located within their boundaries.

As such, PVUSD has provided seven portable buildings at E.A. Hall Middle.

Principal Andrea Hernandez said that the school year began with a one-week orientation.

“It was a really strong start with the students and families,” she said. “It’s been a lot of fun. It’s been a long time coming, and it’s exciting to have students here.”

The relationship between Navigator and Pajaro Valley Unified School District has been rocky since the organization presented its charter petition in 2018.

The Pajaro Valley Unified School Board of Trustees denied the organization’s initial charter petition, and the Santa Cruz County Office of Education did the same on appeal three months later. That changed in January when the State Board of Education approved the petition.

PVUSD officials have said that the charter will drain funds from the already cash-strapped district.

This includes the immediate loss of $2 million in the first year from the district’s general fund. That number will rise to more than $4 million annually once the school is established.

Martha Denny, whose daughter is a kindergartener in the school, said that she was delighted that her daughter was chosen in the lottery selection process.

“I love the community feel,” she said. “I love that every student wears a uniform. I love that the kids are excited to go to school every day.”

Denny said that her desire to send her daughter to Watsonville Prep stemmed in part from an inequity she sees between schools in the north and south halves of PVUSD.

She pointed to the “beautiful” football field in and gymnasium at Aptos High School, as well as the school’s lighted walkways and large parking lots.

“Tell me where that is at Watsonville High,” she said.

Denny’s other kids are graduates of Watsonville and Aptos high schools, where she said they had “decent” educations.

“I feel that public schools are not bad,” she said. “They work hard, and there are good teachers. What I’m saying is that the resources are not there.”