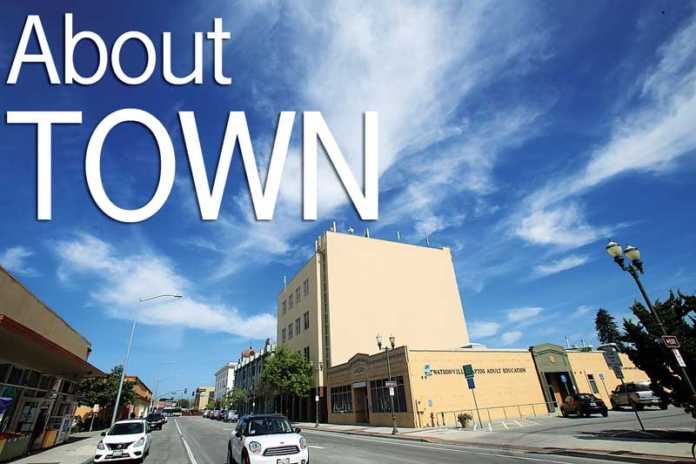 About Town, Week of March 25

Tarmo Hannula: I notice work going on at the Five Mile House in Corralitos at the corner of Corralitos Road and Freedom Boulevard. Once a café, the building has been shuttered for years. Now they’re working on a new parking lot surrounding the place and I see new paint swatches dashed across the exterior, like someone is sampling what a new look will be. One woman who works in the same corner center said she heard a new café and herb room is possibly in the works.

Also in the center is the very popular and long-standing Cadillac Café, which serves breakfast and lunch. I stuck my head in the door Thursday morning before 9 a.m. and it was an ant heap of activity with the breakfast rush. I saw on the menu they offer a host of scrambles, omelets, Mexican dishes, pancakes, waffles and a wealth of other breakfast standards. I’ve heard from several folks that their Classic Sub Sandwich is a winner. They even feature seafood, including fish and chips, shrimp and calamari.

ABOVE: Work is under way on the Five Mile House in Corralitos which has been shuttered for years. (Tarmo Hannula/Pajaronian)

On Aviation Way I spotted a new business sign on the 200 block called Hand Car Wash. It seemed to partly on the Watsonville Diesel business property, which features three large garage bays. By the way, Watsonville Diesel still has a huge banner in their window: Help Wanted.

Someone won the Powerball Lottery, $768.4 million. The ticket was purchased at a Speedway Store in New Berlin, a suburb of Milwaukee. Seven people won $1 million each by matching the five white balls. Have a blast spending all that money… I’ll keep my day job.

At Seacliff State Beach the salvage operation is winding down where a trimaran sailboat and a 53-foot powerboat washed ashore earlier this week. Several large industrial-size trash containers were being filled with the broken-up boats Friday morning as a crew groomed the beach for the last scraps left in the sand. They were careful to collect any signs of fuel, a large battery and other hazards.

At Watsonville High I saw two signs today that are indications of the changing seasons. One was a reminder for seniors to sign up for the caps and gowns. The other colorful sign announced the school’s Spring Pep Rally, which they promise to be “improved.” It will take place this afternoon.

In Corralitos I also spotted a sign letting locals know about the annual Spring Fling Egg Hunt at Bradley School. The event, on April 20 from 11 a.m. to 3 p.m., will feature bounce houses, games, face painting, a petting zoo, food trucks and vendors. Tickets can be purchased at Bradley Elementary School, 321 Corralitos Road.

At the Rancho Del Mar shopping center in Aptos, which is undergoing a major rebuild, a new sign was posted Thursday for Peet’s Coffee on the façade of the of the newly rebuilt spaces. Peet’s Coffee was founded in Berkeley in 1966 by Alfred Peet. The now popular café has more than 200 locations worldwide, including Shanghai, China. According to their website, “Peet’s introduced the U.S. to its darker roasted Arabica coffee in blends including French Roast and grades appropriate for espresso drinks.”

Tarmo Hannula: With the first day of spring arriving last Wednesday, the mixed bag of weather seems typical: sporadic showers, blasts of cold air chased away by sunny spells. Today it rained really hard at times and got pretty darned cold. The National Weather Service said there is a 20 percent chance of showers on Thursday. Otherwise, it will be partly sunny, with a high near 61 degrees. Winds could gust as high as 23 mph. New precipitation amounts of less than a tenth of an inch are possible.

A dramatic three-vehicle crash left a 60-year-old woman dead Tuesday on 41st Avenue at Clares Street in Capitola. Police say a white van plowed into a Smart car driven by the victim, which was shoved into the path of a Metro Bus. While the victim and the Smart car ended up in the center of the heavily traveled intersection, the van ran up onto the sidewalk in front of MatressFirm across Clares from Chase Bank. The incident forced police to close parts of the intersection for nearly four hours. The incident is still under investigation by Capitola Police.

Also, on Saturday, several dozen educators, K-12, showed up at the Nature Center in Ramsay Park for a one-day workshop titled Nature Journaling for Science. According to Amity Sandage, environmental literature coordinator, the teachers were learning how to better use the setting of nature, including surrounding sloughs in Watsonville, to heighten their environmental literacy and then be able to share that information with fellow educators and, ultimately, their students.

I don’t know if you saw the road closure at Pennsylvania Drive near Hammer Drive Saturday. A man riding a motorcycle plowed into the rear of a parked SUV at an unsafe speed and shoved it about six feet. It looked like the motorcycle was burned up. Watsonville Police had to close Pennsylvania for close to four hours to complete their investigation, which is ongoing. The man was critically injured.

Big Sur is having a calamity with so many tourists showing up. Parking and congestion are at the top of the concern. The narrow, two-lane Highway 1 can only handle so much traffic flow, let alone thousands of cars parked haphazardly along the shoulder, especially around hot spots like Pfeiffer Big Sur State Park during weekends and holidays. I think I heard the city council is weighing options to ease the burden. Plan carefully if you want to head south into Big Sur.

I’ve seen in the news that the movie, “Us” — with parts of it filmed at the Santa Cruz Beach Boardwalk — has become a box office runaway hit. Over the weekend, sales topped $70 million, even edging out the very popular “Captain Marvel” Disney production.

My wife and I went to see “Us” last night at the Cinema 9 (Regal Theaters) in downtown Santa Cruz. It was sold out, except for a few spare separate seats here and there, despite it being screened in two theaters. TV news has shown that people are now coming in greater numbers to the Boardwalk in hopes of catching a glimpse and flavor of the very setting for the film, written and directed by Jordan Peele. He gained enormous popularity with his last film, “Get Out.”

Commercial crab season is slated to end April 15. I’ve heard mixed reviews about how the catch went this time around. This morning I spotted stacks of empty crab pots sitting in the Santa Cruz Harbor.

If you think you’re on a lucky streak, tonight might be your night with the Powerball Lottery soaring to around $750 million. The drawing is at 7 p.m. this evening. Good luck.

Pajaronian Staff - June 21, 2022
In the fall of 2013, Cabrillo College celebrated the opening of a remodeled and expanded Science, Technology, Engineering and Math (STEM) center in Aptos. After...