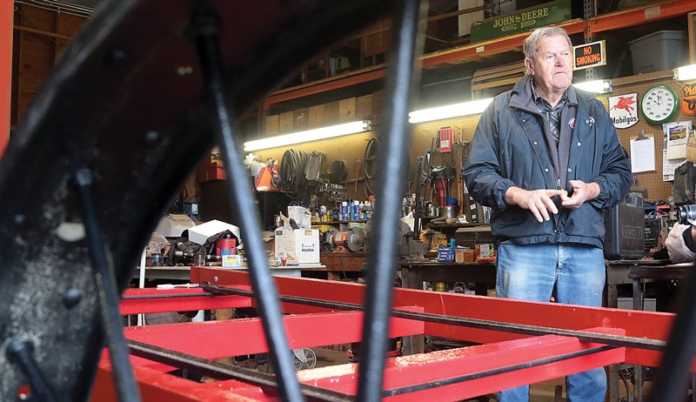 WATSONVILLE — In a barn tucked away in a corner of the Santa Cruz County Fairgrounds, volunteers from the Agricultural History Project are hard at work restoring a piece of the past.

Bright red paint now adorns a pre-1900 mechanical manure spreader — a contraption that the CEO of the Agricultural History Project (AHP) John Kegebein dubbed “a farmer’s best friend.” Piece by piece the machine is being assembled, with the intention of displaying it at the organization’s museum.

“Before these came along, farmers had to haul composted manure out to the fields and spread it by hand,” Kegebein explained. “So this was a big step forward.”

First invented in 1875, with its first patent issued to Joseph Kemp in 1877, manure spreaders would soon rise to popularity on farms across the U.S. From 1885 until 1910 there were more than 116 different manufacturers of the machines, eventually resulting in some going out of business due to a saturated market.

This is not the first manure spreader the AHP has worked on; three others have been restored by the organization over the years. But there are some unique aspects of this one in particular, such as the ornamental design of the front end of the machine, or the fact that some of the wood used in the restoration was taken from a pine tree that fell years ago by the fairgrounds’ Florticulture Building.

“We left the wood to dry up in the rafters for a few years,” said Tom Stickel, who admitted that the wood pieces of the manure spreader have been the most challenging aspect of the project.

Stickel, who has worked with the Agricultural History Project for about seven years, has been documenting the stages of the machine’s restoration.

“It was almost collapsing in on itself when we first brought it in,” Stickel said.

ABOVE: Tom Stickel of the Agricultural History Project attatches a hitch to a restored 1875 manure spreader. (Johanna Miller/Register-Pajaronian)

The manure spreader is from a farm in Scotts Valley, possibly a dairy farm, Kegebein guessed. The exact year of the model is unknown, but Kegebein confirmed it was definitely pre-1900. Luckily, much of the metal is original and in good shape.

The Agricultural History Project began in 1985, when a group of people saw a need to preserve the history of farming in the Pajaro Valley. Today, school groups and families from across Santa Cruz County visit AHP’s facilities at the fairgrounds to explore educational exhibits, historical archives and the organization’s current projects and research.

For Kegebein, preserving the history of farming is vital.

“We do this so that future generations know how difficult things used to be, how hard it was to farm and produce their food,” he said. “It gives them an appreciation for what they have now.”

Looking ahead, the Agricultural History Project has a lot planned. Kegebein said the organization is looking into creating exhibits regarding the cultural aspects of agricultural in the area.

In addition to the manure spreader, other tractors are currently being worked on inside the AHP’s restoration barns. Stickel said he hopes one or two will be able to be driven in this year’s Santa Cruz County Fair.

To learn more about the Agricultural History Project, visit aghistoryproject.org or call (831) 724-5898.