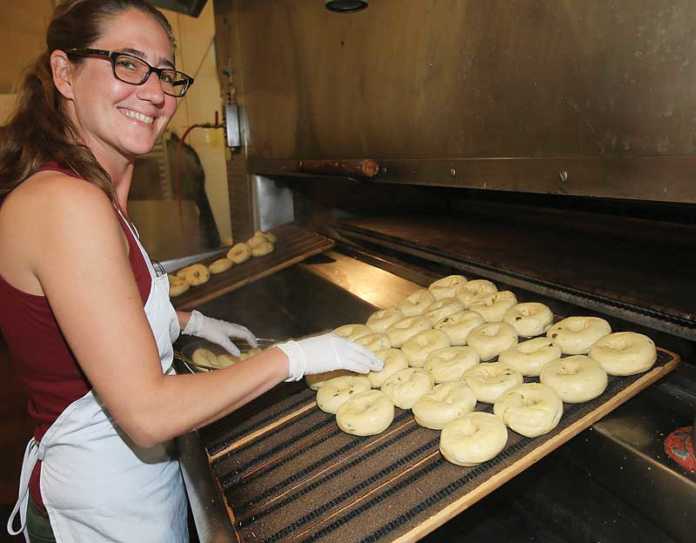 SANTA CRUZ — The Bagelry, situated in three locations in Santa Cruz County, has been a pillar in the restaurant world for the past 40 years. First established in 1977 on Seabright Avenue at Soquel Avenue, the sit-down/take-out eatery has continued to grow, not only with their extensive menu, but by offering a host of jobs that have served as a springboard for local students, households and older workers.

A brainchild of Janice Walton Hadlock, who used to play music with band members Steve Walton Hadlock and John Hamstra, who were roommates at a Washburn Street home in Santa Cruz, the trio spawned the idea of a business that would serve fresh, hearth-baked bagels — a product not offered locally.

“We first started at the Seabright location in a 1,000-square-foot space,” Hamstra, who has since bought out his partners, said. “There was barely enough room for the bakery and supplies and no room for a proper kitchen. We only offered a minimal menu. Primarily we opened as a bakery but the public wanted more, like a café and other bagel toppings.”

Hamstra said The Bagelry started with experimentation at home. Then the Bagel Bakery opened in Monterey, which offered some inspiration.

“Janice’s wheels began to turn,” Hamstra said. “She was the driver; she found a storefront. We began looking for equipment. We found a hand-fed dough forming machine.”

Hamstra said that not one of them was a schooled chef or schooled in culinary. He said they largely just needed to get started by trying things out with the public.

Eventually people began to contribute to the spread menu and the wide variety of soups, salads and desserts.

“Lots of people continued to add to the repertoire over the years and it has worked well for us,” Hamstra said. “It’s a nice thing to offer varieties to the public, especially from the talent we have on our staff.”

Currently there are about 60 people running the three locations of The Bagelry, which offers wholesale and delivery. The business offers a traditional style of about 15 bagel flavors, including their in-house three-seed, a jalapeño cheese, whole wheat varieties, gluten free, tomato herb, and the standard onion, garlic, salt, poppy, sesame and so on, all made from scratch.

Unlike many bagel places, The Bagelry makes their dough in house and refrigerates the bagels to retard further yeast rising (as opposed to freezing it), and then boils the dough prior to hearth baking.

“We never had a business plan; we had a low horizon plan,” Hamstra said. “I personally enjoy our regular customers. I try to spend a lot of time on the floor and keeping in the mix. The rewards are frequent and direct. It feels good to know that you are feeding people healthy food.”

“It’s been very rewarding and I feel we’ve had a good measure of luck in the business,” Hamstra said. “So many things can go wrong. The community support has been wonderful. We’re happy to be part of the community and we certainly appreciate their support.”