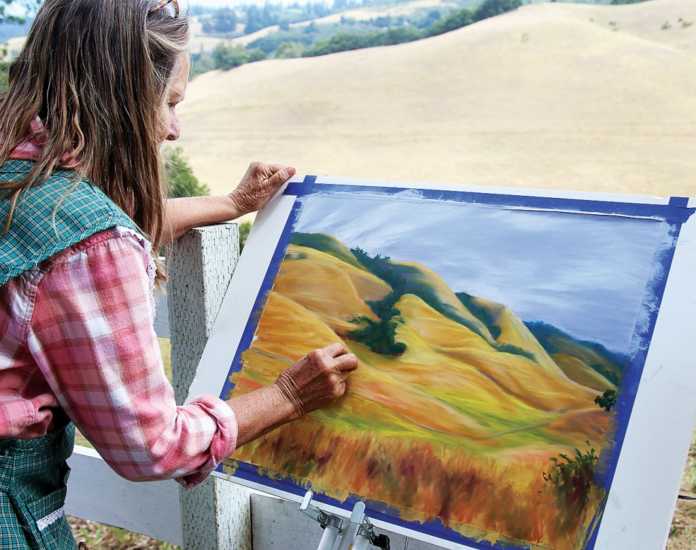 Art in the open

WATSONVILLE — Fifty-seven artists have been canvassing the Pajaro Valley recently, building an opus of paintings as part of the Plein Air: Our Bounty exhibit that will open at Pajaro Valley Arts Aug. 14.

A statement by organizers reads: “Dozens of invited artists are again planning to brave the weather, climb hills, lug easels, paint and canvases to sites in southern Santa Cruz County. Painting outside on the land, En Plein Air, has long been a traditional pursuit in Santa Cruz because of the natural light and beauty of our collective landscape.”

Artist Michael Motes, who lives at Pajaro Dunes, was busy with a small oil painting on board Tuesday in front of a dramatic sweeping view of the Santa Cruz Mountains as seen from Rancho Santa Maria on Hecker Pass.

“It’s amazing out here,” he said. “There’s not one house or building in the entire scene. I’ve never been here before. You just can’t beat the view. This is my first time taking part in the show. I’m excited to be a part of it.”

Susanna Waddell, who is curating the show with Judy Cooper and Bruce Nicolson, said each artist will be able to put as many as four works in the exhibit. The show stems from the original Plein Air show of 2010, “Connecting With the Land,” which was the brainchild of the late Corralitos artist Mary Warshaw and Waddell. The 2019 Plein Air exhibit will be dedicated to Warshaw and the late UC Santa Cruz art professor, Kay Metz.

“Everyone’s excited about the show and we’ve had a strong interest from so many artists,” Waddell said. “Jess Brown from the Farm Bureau was so helpful in recommending these wonderful sites where these folks are stewards of the land. I’ve been so inspired by the artists as this moves forward.”

Jan McGeorge of Santa Cruz worked from several trays of oil pastels to create a pastel painting of the mountains covered with dry grass as a group of acorn woodpeckers darted back and forth between several dead trees.

“I love these golden hills,” she said. “It was foggy this morning but it burned off. This place is amazing.”

McGeorge said she was part of the “Land Sea & Air” show and was glad to be engaged with the current exhibit.