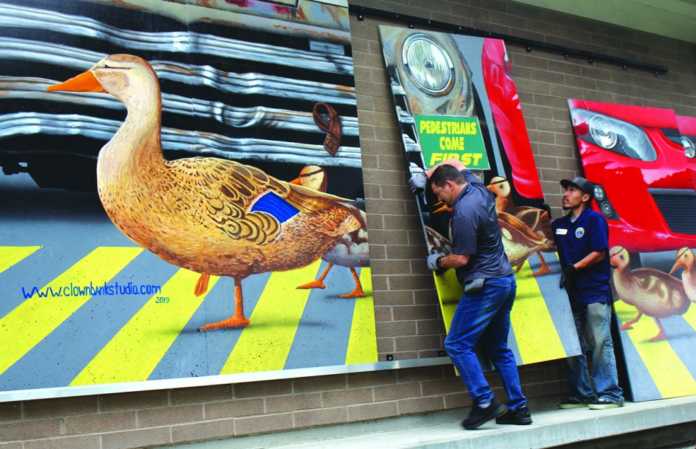 Art on the move

WATSONVILLE—A cool, foggy morning saw a pop of color Monday as three large murals were hoisted up onto the sides of Watsonville City Hall.

The pieces are part of the second annual Moveable Murals exhibit, organized by Pajaro Valley Arts (PVA). Three local artists were selected to showcase their artwork on the building, which faces a busy section of Main Street in downtown.

“It’s a really nice feeling, seeing it all come together,” said artist Peter Bartczak of Clown Bank Studios as his piece was assembled. “It was a lot of fun to do.”

Bartczak’s piece, created with paint and airbrush, depicts a mother duck and a line of ducklings crossing a street in front of traffic, reflecting this year’s exhibit theme of pedestrian safety.

“It’s something that has become a huge issues in our community,” said PVA’s Judy Stabile, who was on hand Monday to organize the installation. “Having these murals show the need for street safety—it makes a big impact.”

Bartczak, who has murals displayed throughout the downtown and Watsonville Airport, pointed out details in his new mural. Such as how the cars waiting for the ducks to cross were entirely different: a beat-up old trucks and a brand new, flashy red car.

“I tried to come up with an idea that was fun, and not pointing fingers at anyone specifically,” Bartczak said. “Everyone has to take precautions. It doesn’t matter who you are or what you drive.”

This year’s Moveable Murals was funded with a grant from the City of Watsonville. Head of the city’s Building Department Grant Adams, along with fellow worker Miguel Navarrete, were called in to help situate the murals onto City Hall.

“They’re doing such a great job and handling them with such care,” Stabile said. “They can tell how important these pieces are to the the artists.”

Priscilla Martinez and Jaime Sánchez, the other two artists selected for this year’s exhibit, were also observing installation Monday morning.

Martinez has been the poster artist for the past five Strawberry Festivals, including this year’s, which is displayed for Moveable Murals. Her second mural displays “Watsonville” in large letters that are reminiscent of old-fashioned agricultural labels with neon safety traffic signs surrounding the text.

“This theme… it’s definitely on everyone’s mind right now,” Martinez said. “It’s a good message we need to get across.”

Sánchez said he really liked how well the City Hall building worked for the exhibit.

“It’s almost like the building was made with a project like this in mind,” he said. “I love it.”

Sánchez’s mural depicts a group of stylized white and peach-colored birds, inspired by the Pajaro Valley and the fact it is a resting place for many species.

“Public art is such a healthy thing for a community,” Sánchez added. “It can bring in some positivity but also get people thinking.”

Pieces from last year’s Moveable Murals have been sent to other locations, including a new installation at Loaves and Fishes.

“It’s a really exciting project,” Stabile said. “We’re creating this never-ending cycle of public art. I think it really brings a new depth and brightness to our city.”

For information on Moveable Murals and other PVA projects visit pvarts.org.