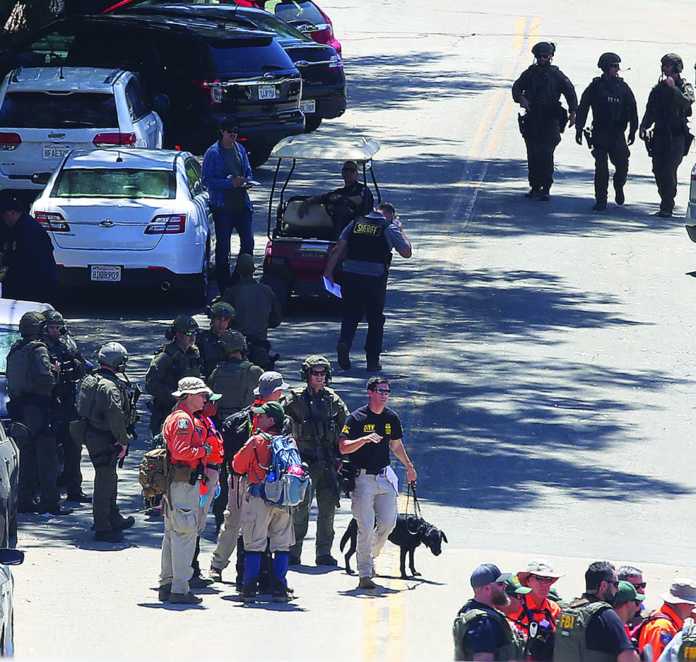 The Gilroy shooting: locals weigh in

“Safety has been our highest priority for many years,” he said.

According to Reyes, the boardwalk employs 60 safety officers during the peak summer season, who go through 120 hours of rigorous training that includes active training with local law enforcement.

The boardwalk security system also includes security cameras that monitor the boardwalk and surrounding properties 24 hours a day, 365 days per year, and plainclothes officers that patrol the park, Reyes said.

“Overall this is an area we take extremely seriously,” he said. “We take it as serious as the safety of the rides and as we take the enjoyment of the guests.”

“Our thoughts are with the folks affected in Gilroy, and it’s really unfortunate to see something like this so close to home.”

Watsonville Police Department spokeswoman Michelle Pulido said that increasing the number of patrol officers during the Strawberry Festival has been a standard practice for years.

Watsonville city officials are meeting with WPD Monday and Tuesday to discuss any possible changes to safety protocol during Watsonville Strawberry Festival on the Monterey Bay. That festival, which opens Friday night, draws thousands of people to the open-streets event.

“We’re all definitely deeply saddened by the tragedy,” Calubaquib said. “It’s definitely something that’s put us on higher alert. Our hearts go out the people who were injured or killed.”

At the Santa Cruz Country Fair, visitors pass through a bag inspection station, and then are scanned for metal objects by a security officer before entering.

Moreover, deputies from the Santa Cruz County Sheriff’s Office – both uniformed and in plainclothes – are always on patrol, said fair manager Dave Kegebein.

But it is important to note, Kegebein said, that the shooter bypassed similar security measures at the garlic festival by cutting through a gate.

He added that it is too early to talk about potential changes.

“We need to sort out and understand what happened, and then apply what we learn as needed,” he said.

In a public statement released late Monday afternoon, fairgrounds officials had a message for the Gilroy community.

“The Santa Cruz County Fair family sends our thoughts and prayers to all those affected by the shooting at Sunday’s Gilroy Garlic Festival,” the statement read.

The statement continued with a message to potential attendees of this year’s event, which runs from Sept. 11-15.

“We wish to remind everyone that plans to attend our 2019 Fair this coming September that security and public safety has been and will always be a large part of how we plan and operate Santa Cruz County’s premiere annual community event. As we learn more about the Garlic Festival incident our team will analyze potential adjustments to our security protocols and implement improvements as identified.”

Jaylin Piñon, a clerk at Hidden Fortress Coffee Roasting at 125 Hangar Way in Watsonville, said she left the Garlic Festival an hour before the shooting began.

Piñon, 17, said her family is from Gilroy, and that she has been attending the festival for years.

“My best friend was volunteering at a food tent when the shooting started,” she said. “She told me she heard the gunfire. But she is okay. I’m so glad she is. I just don’t understand what people are thinking. What makes this man wake up one morning and think he is entitled to go and kill people? I mean, a 6-year-old boy has died.”

Jordan Phillips of Hood River, Ore. said he was at the festival selling products for his company Columbia Black Garlic when the shooting began.

Reluctant to leave his product and cash behind, Phillips stayed with his booth and watched as the shooter fired into a crowd at a music event from about 50 feet away.

“(The shooter) was in the next aisle over, and about 50 feet away, shooting toward the music event,” Phillips said.

First responders responded within two minutes pulled her in and started performing CPR, he said.

“I really hope she made it,” he said. “I honestly have never been through anything this traumatizing before.”

Watsonville City Manager Matt Huffaker said that the city will be increasing its security measures at the Strawberry Festival, with extra officers and support from the Santa Cruz County Sheriff’s Office.

“All of our officers and first responders will be on high alert,” he said.

Huffaker added that the city plans to hold the popular festival despite the tragedy.

“The Strawberry Festival has always been a special event, a safe place for the community to gather from throughout the region,” he said. “In the wake of recent events, it’s more important than ever to bring the community together and continue with the event as planned.”