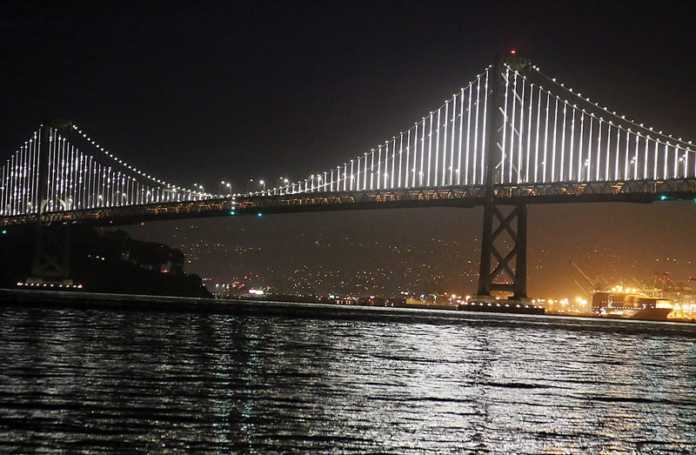 Birthday in the big city

SAN FRANCISCO, CA — How do you celebrate someone’s 70th birthday? Since fitting seventy candles on a cake wasn’t an option, I decided to take my wife to San Francisco for a big night in the city.

Sarah was born June 30, 1949 (the exact day my parents were married) so it fit snuggly into the weekend.

We headed over Highway 17 Saturday at noon and went right to our favorite lunch spot in San Jose, the Falafel’s Drive-In, at 2301 Stevens Creek Blvd. Though I’ve mentioned this place before, it’s worth a reminder. They’ve been serving up fresh Middle-Eastern food since 1966. There’s always a line; an indicator that something good is happening there. There is plenty of indoor and outdoor seating at the casual, easy-to-get- to location.

Following our falafel gyro sandwich, onion rings and orange freeze (get one of these—they’re fantastic), we swung onto northbound Highway 280 and drove to the Daly City BART station in the south Bay Area. We placed our parking permit (Sarah got it online) on the dash and walked right onto a train that was there with its doors open. About 20 minutes later we went up the stairs to street level at Market and Powell streets right in the middle of the buzzing city.

This bronze statue, titled “Paparazzi Dogs,” is on the street in San Francisco. (Tarmo Hannula/Pajaronian)

While Daly City was wind-swept, foggy and cold, here it was sunny and warm, so we peeled off our jackets and strolled up Powell Street noticing the huge line of tourists lined up for a ride on the iconic trolley cars. Right away we picked up on the sounds of different languages — Spanish, Russian, French, English and Cantonese, and on and on — from the throngs of tourists filling the sidewalks. Sarah loves the Lush store, a chain business that features very high-end cosmetics, shampoos, lotions, balms, bubble baths, conditioners, nail products and more. They’re not cheap, but their stuff is incomparable. I mentioned that it was our first stop on our birthday visit to the city, and the kind clerk tucked several goodies – including a bath bomb – into our bag as a birthday gift.

After a brief cappuccino break at an outdoor table at Bancarella in Union Square, we marched up a steep section of Powell Street — which turned into a challenging trudge up one of the city’s steepest streets.  We neared California Street and our hotel for the night, the famous Mark Hopkins. The hotel was almost completed in 1906, but the San Francisco earthquake came along and caused major interior damage by fire. The opening was delayed until 1907. The 19th floor penthouse suite was converted in 1939 into the glass-walled famous Top of the Mark restaurant and cocktail lounge. Our room was on the fifth floor and offered grand views of Nob Hill and a peek at the Golden Gate Bridge.

A statue dominates a small park with The Mark Hopkins Hotel in the background. (Tarmo Hannula/Pajaronian)

After relaxing for a bit we made our way down the steep streets to a restaurant we learned about on the popular TV show, “Check, Please! Bay Area.” The show, which airs Thursday at 7:30 p.m. (Channel 25), spotlights three guests that dine at their choices of restaurants, and then talk about their experience on the program. The host of the show, Leslie Sbrocco, keeps the show lively and informative. The place was the Z&Y restaurant, 655 Jackson St. where they serve Szechuan style Chinese food. We were seated at a community table, which turned out to be a wonderful addition to our evening. On one side of use was a couple from China, who have been living in the states for a few years. On the other side was a family from Spain on a several week tour of California. They’d just driven in from Yosemite and said the loved it. On top of fantastic food, the spontaneous and engaging conversation between all of us truly added to a fulfilling dinner.

Chinatown in San Francisco is a dramatic flurry of color, signs and businesses. (Tarmo Hannula/Pajaronian)

In the second part of this story we take in a comedy show at the famous Punch Line with comedian Will Durst, breakfast at our favorite dim sum spot in Chinatown, check out the huge San Francisco Pride parade and then, being Sarah’s birthday, meet up with a surprise guest for lunch at Fisherman’s Wharf.