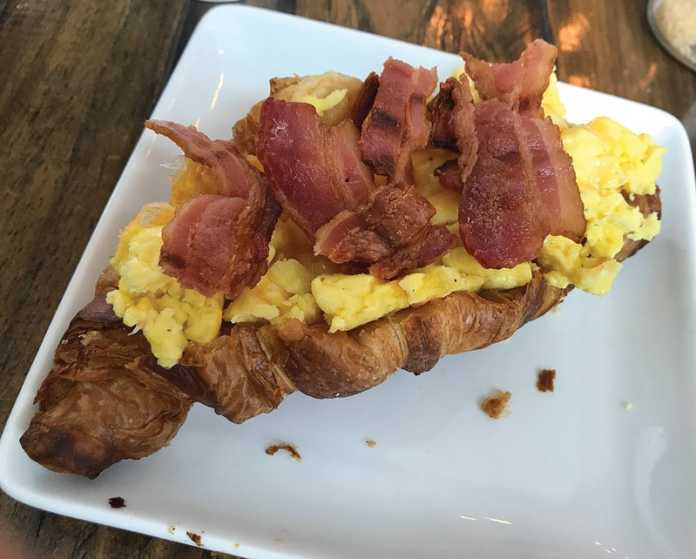 A weekly column that celebrates local businesses — especially eateries, watering holes, coffee shops and the like.

The outside of this hidden gem in Corralitos is impeccably unassuming, but the food and drink inside are anything but. Corralitos Coffeehouse, 531 Corralitos Rd., Suite C, pairs a fresh cup of coffee and some delicious pastry concoctions that have made the small business one of my favorite spots to relax on a Sunday morning. When I’m feeling a real craving for some food, their breakfast croissant with bacon, egg and cheese ($6.95) gets my day going. It is exactly what it sounds like: a fresh croissant sliced open and stuffed with eggs and bacon. Yum.

I love supporting local businesses, and buying one of Fruition Brewing’s beers made with hops from Akiyama Hopyard does that in spades. At the moment, the newly-opened brewery has three beers containing Akiyama Hopyard hops: Snack (tart table), Slip (pale lager) and Symphony in C (amber lager). The Symphony in C’s straightforward and refreshing taste is joy to have while soaking in the sun on their outside patio.

I hear it all the time: “Watsonville has some of the cleanest, nicest beaches on the Central Coast.” I tend to agree with that, though I hope the word doesn’t spread too far and ruin my favorite part of the Pajaro Dunes: a refreshing, albeit temporary, separation from the nonstop world we live in. I cannot count how many times I’ve gone out to the Dunes to reflect and reset with only my thoughts, a pen and notepad. I’ve also taken plenty of naps in the sun and the breeze. A smile is creeping on my face as I write this.

While Coffeeville in Watsonville might be known mainly for its specialty roasted coffees and multitude of espresso drinks, it also has plenty of great food for sale. I had not tried any of its hot food items (only the occasional muffin) until last week when I stopped by the coffeehouse extra hungry. I picked out a freshly cooked sausage breakfast sandwich. The sandwich was flavorful—the egg whites, meat and cheddar cheese complimenting each other and the bread perfectly crispy.

My favorite item from Peet’s Coffee is surprisingly not its coffee. I love their herbal iced tea—a bright red hibiscus tea infusion that is both sweet and tart. Last weekend I went to the new Peet’s location in Aptos in the Rancho Del Mar Shopping Center. The shop is lovely and the employees are friendly. However, my tea seemed to be shaken a bit too much, resulting in a rather large head of foam. Usually there’s just a tiny bit of foam on a shaken iced tea. But it was still delicious and refreshing.

Streetlight Records in Santa Cruz is the last remaining major record store in the county. While I do stream music online, I still like to pick up a physical album once in a while. Last week I picked up Jamie Cullum’s new album “Taller.” Streetlight still has two listening stations, as well as merchandise (including some great concert posters by local artists) and music equipment. It hosts events throughout the year, such as concerts and artist meet-and-greets, and also participates in the international celebration known as Record Store Day every April. Follow them on Facebook for weekly updates.

Pajaronian staff - June 29, 2022
WATSONVILLE—The Watsonville City Council at its Tuesday meeting signed off on an agreement with Pajaro Valley Arts for the sale of the historic Porter...