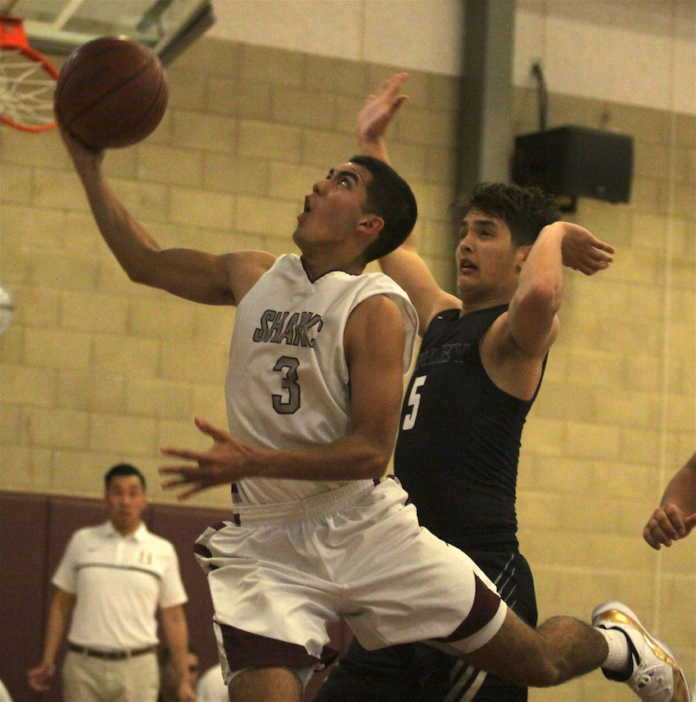 WATSONVILLE — The raucous crowd known as the “Shark Tank” chanted, “it’s-all-oh-ver!” Head coach Ed Kelly — normally emotionally reserved — walked down the bench high-fiving his players and let out a loud “Wooo” during the final minute. A few fans rushed the court as the clock hit triple zeros.

It seemed like everyone wearing maroon, gray and white was having the time of their lives on Tuesday as St. Francis punched its ticket to its first-ever NorCal championship game with a 64-51 win over Bentley.

Everybody but the players. They walked off with a stern and focused look on their faces. They weren’t ready to raise their arms in relief or drop to the floor and cry tears of joy.

There was still work to be done.

“We’re not celebrating anything right now,” said St. Francis senior center Ruben Ibarra, looking up at the wall of championship banners in the St. Francis gym, “because we ain’t won nothing yet.”

The top-seeded Sharks will play for history on Saturday against the No. 2 seeded Elliot Christian Eagles, who edged No. 3 Branson, 41-34, to advance. The game is set for a 6 p.m. tipoff and the “Shark Tank” is expected to be rocking and overflowing for the fourth straight NorCal Division V playoff game.

Only this time, there will be a little bit more on the line.

Only two teams from Santa Cruz County have ever won a NorCal championship: Aptos in 1986 and Santa Cruz in 2005.

So the stakes will undoubtedly be high.

“It’s through this roof, it’s through this gym, it’s not even on this earth,” said St. Francis senior guard Dominic Figueroa of the team’s confidence after its 22nd straight victory. “This is such a great feeling. It’s our senior season for a lot of us and for it to keep going like this is just wonderful. I’ll remember it forever.”

Tuesday began as a dogfight but turned into another page in the Sharks’ book of memories by the end of the third quarter.

St. Francis went into the locker room up by three but exploded for six points in the first minute of the third. Bentley (22-11) — the runner-up of the North Coast Section’s D-V playoffs — called a quick timeout to try to slow the Sharks but Figueroa, Ibarra and senior point guard Sandor Rene Rodriguez, who had six points, seven assists and five rebounds, continued their onslaught after the stoppage.

Six-foot-5 junior forward Jason Gallo returned to the court after sitting out the majority of the first half with foul trouble and finished with nine points, six rebounds and two steals. His running layup midway through the third capped off an 18-2 run out of the half which put St. Francis up by 19.

Gallo’s length not only helped with defense and rebounding but his athleticism in the transition game allowed the Sharks to play their usual fast break offense, which led them to Santa Cruz Coast Athletic League and Central Coast Section championships this season.

While Gallo sat, Ibarra held down the fort.

The 6-foot-4, 270-pounder buoyed the Sharks by scoring all 11 of their points in the opening quarter and finished with a team-high 23 points and 11 rebounds. It was a much-needed shot in the arm for the home team with usual leading scorer, junior forward Chase Watkins, struggling to find his shot and Gallo on the bench.

“I think that’s what I’m always proud of about this team. We’ve always had guys stepping in,” Kelly said. “Ruben was great. Gallo had a stretch. Chase had a stretch. They all had opportunities and they took advantage of it.”

Figueroa’s 3-pointer during the final minute of the first half gave the Sharks the lead for good and senior wing Ivo Lasich, who played well off the bench again, chased down an offensive rebound and put it in with five seconds left to put St. Francis up by three at the break.

Bentley, which upset rival Head-Royce on Saturday to advance to Tuesday’s semifinal, trimmed the deficit to 12 at the end of the third and had it down to nine late in the fourth but St. Francis made its free throws down the stretch. Ibarra’s back-to-back buckets with two minutes left all-but secured the win.

Figueroa had 12 points and Watkins added 11. The latter still impacted the game while working through an 0-for-7 start, finishing with seven rebounds, five assists and three blocks.

All three of his rejections came on senior Isaih Hood, who kept Bentley in it with a game-high 26 points on 10 of 20 shooting. His teammates struggled from the field and from deep, going 4 of 23 from beyond the arc. Bentley made its first 3-pointer with a little more than four minutes left to play but it was far too little and far too late to pull the upset.

“We knew in the first half we weren’t getting things going,” Rene Rodriguez said. “Second half we got together in the locker room and we just came out and put it all together.”

“Right now, that just felt like another game to me,” Watkins said. “I think we’re getting used to this state playoff atmosphere with our great fans and their great energy they bring to the ‘Shark Tank.’ I definitely think we settled down more and it didn’t show in the stat sheet but I think our demeanor after the game did. We weren’t so hyped up because we’re on a mission. We’re trying to win a state championship and this was one game that we needed to win to be able to get there.”