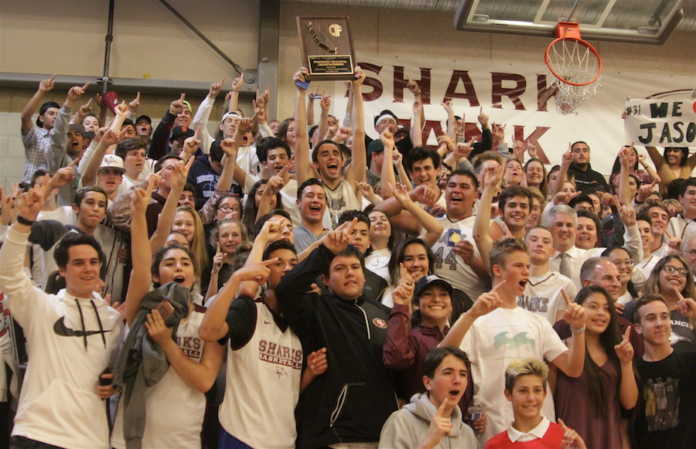 WATSONVILLE — It was slowly building.

The cheers were turning into chants.

Everyone in maroon, gray and white was in sync.

Pack the bags. Fill up the gas tank. Make the hotel reservations.

The St. Francis Sharks are heading to the capital for one final game: the California Interscholastic Federation Division V State Championship.

“It hasn’t sunk in quite yet,” said St. Francis head coach Ed Kelly. “Tonight we’re going to enjoy this one for a little bit.”

Top-seeded St. Francis became only the third team from the county to win a CIF NorCal title on Saturday, beating the No. 2-seeded Elliot Christian Eagles, of Lodi, 69-64, for the Division V Championship.

The Sharks (29-2) and their hundreds of fans, many of which leaned against the wall of the overcrowded St. Francis gym, which was at capacity 40 minutes before the tip, hugged, cried and lifted their arms in jubilation as the final seconds ticked off. Junior forward Jason Gallo carried the trophy into the mess of fans in the stands and posed for photos. And then the chants came.

It was a euphoric, thunderous and wild finish to an unbelievable night of basketball between two teams that fought for every point, every rebound and every loose ball until one was left standing.

“I can’t even process what just happened,” said St. Francis senior guard Dominic Figueroa. “It’s just surreal. To do it with this group of guys, I’m glad to do it with them and I’m glad it wasn’t anyone else.”

And it took everything and everyone they had to do it.

St. Francis junior forward Chase Watkins scored a game-high 23 points, Figueroa added 16 points — all of them coming in the first half — and Gallo recorded a double-double with 14 points and 10 rebounds, none more important than his final two during the last minute.

The Sharks, Central Coast Section and Santa Cruz Coast Athletic League champions, got a boost — big or small — from everyone who stepped on the court. Senior forward Riley Scherr came off the bench and hit a clutch 3-pointer near the end of the first half; sophomore guard E.J. Kelly drew a charge to nullify a fast break bucket that would have brought the Eagles within three at the intermission; and senior guard Ivo Lasich again provided solid minutes as the sixth man, including a key stretch near the end of the third quarter where he hit two crucial free throws.

“We had so many kids contribute tonight in making plays,” coach Kelly said. “From making little individual plays to big plays and it took all of that to win the championship.”

The Eagles (29-5), the first Sac-Joaquin Section champions in the school’s history, had a handful of chances to take control of the game during the final minutes but St. Francis made the plays when it mattered, coming up with a pair of defensive stops and converting from the free-throw line down the stretch.

Beltz swished a pair of free throws with less than a minute to play to bring the Eagles within one and Elliot Christian forced a five-second call on the ensuing inbounds play to earn a shot at taking the lead.

Valverde drove into the heart of the Sharks’ defense and created a shot for senior guard Onkar Sidhu but his layup with 10 seconds left to play missed its mark. Gallo came down with a clutch rebound, was fouled and hit both of his free throws to put the Sharks up three.

Elliot Christian’s ensuing 3-pointer clanked off the rim and the Sharks held on to record their 23rd straight victory and advance to Friday’s State Championship game at the Golden 1 Center in Sacramento. The Sharks will play Southern California Division V champ Rolling Hills Prep for the state title at noon.

“They’re down. They wanted to go to state but somebody’s got to lose and bottom line is [St. Francis] made their free throws and their 3s,” Elliot Christian head coach Jason Hitt said. “They were hitting buckets and we missed a layup with 30 seconds left to go up. You can’t miss layups and free throws when you get to this level. They made their shots and we didn’t.”

Elliot Christian — deemed a team of destiny set on making history for the city of Lodi and a school of less than 80 students — entered Saturday’s final on an impressive streak of its own, winning 21 straight and having not lost since the new year. The Eagles scored 60 points or more in all-but two games during that stretch with their run-and-gun style and tried to push the pace again. But St. Francis was able to match Elliot Christian’s pace and then some, hitting 12 of their 21 shots from deep and shooting 54 percent from the field.

The Eagles were 8 of 25 from beyond the arc.

“We told them that [the Eagles] are going to have some runs and they’re gonna make some crazy shots,” Kelly said. “It’s a matter of not letting it snowball. The fact that we were able to bring the game back to our style a little more, I was really impressed with our kids’ ability to do that.”

Elliot Christian, which trailed by five at the break, played mistake-free, defense-first basketball in the second half, turning St. Francis over six times in the third quarter alone and clawing its way to a 45-44 lead on Valverde’s 3-point play with 1:35 left in the frame.

The lead changed hands two more times before Watkins’ driving layup near the end of the third quarter put St. Francis up for good.

The Eagles trailed by six in the final stanza before Beltz hit a 3-pointer and Valverde powered in another 3-point play with 2:11 left to tie it up at 62-all.

But Watkins, who poured in 19 points in the second half, nailed a corner 3-pointer with 58 seconds left to give the Sharks enough breathing room to hang on for the title.

“We thought we had a great chance to win if we played out game,” Watkins said. “It was a great game right down to the wire. We did the little things and we came out on top. I can’t imagine how I would feel if we would’ve lost this game. They’re a great team. Great game to them. But I’m just so happy we won this game.”

ROAD TO THE NORCAL D-V TITLE

Where: Golden 1 Center in Sacramento