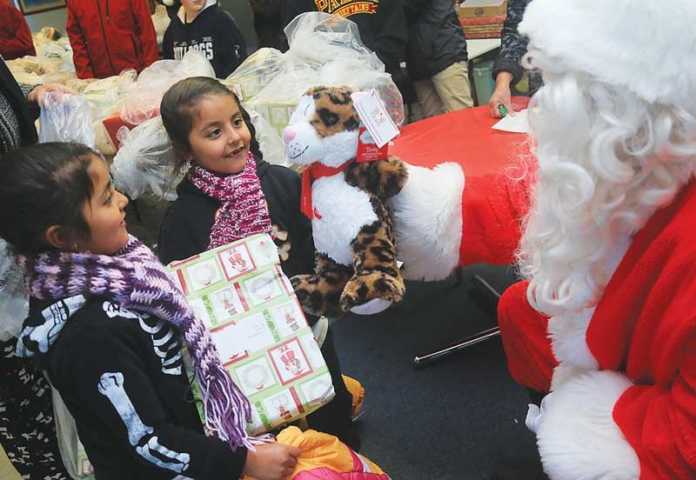 At the end of a long line waited Santa Claus, who would hand presents to the children after greeting them. Arias would get a gift of her own: a giant bag of produce, pantry staples such as beans and rice and a frozen chicken.

Her children also got a new winter jacket.

More than 500 children signed up to get a Christmas toy, which also qualified their families for packages of food to help them cook a meal for the holiday.

Sister Rosa Dolores, who has led the effort since 1991, said she started out by giving gifts to 37 children.

This year’s event included piñata-bashing for the children and a reading of the story of Jesus’ birth, two seemingly incongruous activities brought together to connect Latino culture with the religious aspects of Christmas, Dolores said.

“It’s a joyous event,” she said. “It brings happiness to the children.”

Dolores said she has been offered larger venues for the event but she said the cramped, ramshackle headquarters that has housed the giveaway since 1996 has become a home for the event.

The families began lining up at 7:30 a.m., eventually forming a line of several hundred people.

Whole Foods Market donates the lion’s share of the food, while the presents are from private donations.

A team of volunteers from Palma High School helps pass out the food.

Amy Haas, whose two sons attend the school, said the event fits with her family’s philosophy of community service.

“We live in the community, and I’m trying to raise them to give to those who may have a more difficult life,” she said.

Many of the students were part of the school’s Edmund Rice Club, a social service organization. The group would later travel to Soledad to pass out food to farm laborers.

“If we can instill anything in them it would be compassion,” said Palma Business Manager George Garibay.

Jake Ottone, 17, was packing bags full of produce to be passed out to families. He had just finished exams on Wednesday.

“It’s a good way to start the break,” he said. “It’s good being here with everyone and seeing all the good work being done.”

Older kids in school during the Thursday giveaway will receive their gifts today.