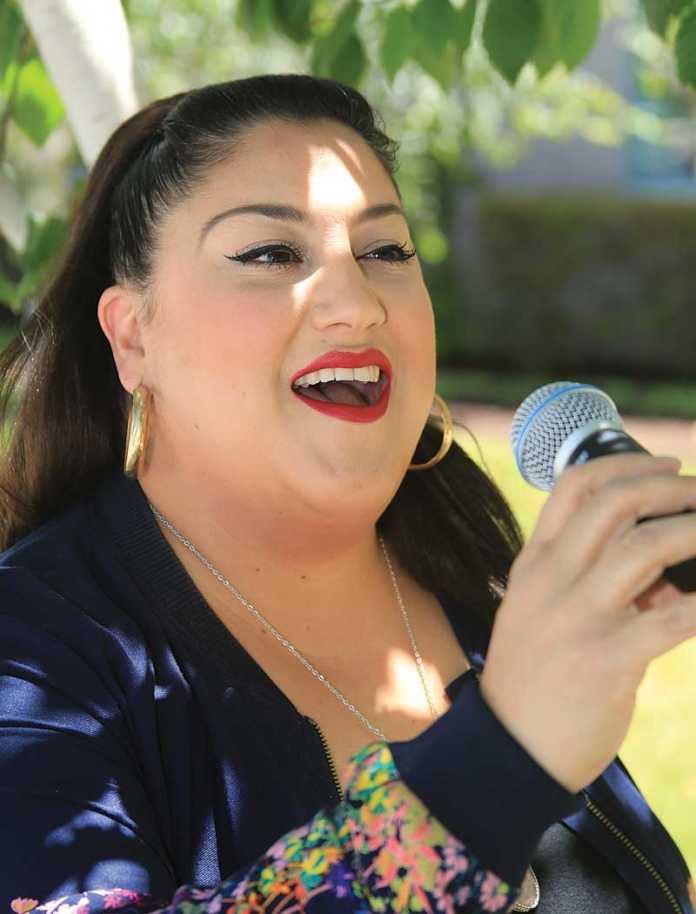 Connecting with her roots

WATSONVILLE — Born and raised Watsonville, singer Coral Price is no stranger to the stage and is aiming to take her career in a fresh direction with a new solo act.

Having sung in her church choir since childhood, as a backup singer and mariachi singer, her musical range is as diverse as it is strong. But recently she found herself wanting to push for more, and for her own voice and style.

“This is about discovering myself and what I can bring back to the community,” Price said.

She said she found her love for music through the church when she begun singing in choir at age 6 while enrolled at Green Valley Christian School — once influenced, she never stopped. She was even selected to participate in Univision’s reality singing competition, although she did not make it onto the show.

“It’s something I feel in my heart. My parents were farmers and music is a big part of our lives,” Price said. “I grew up listening to all genres of Mexican music and church jump-started my love for music and singing publicly.”

By high school, Price said she began to sing for weddings with musician Andy Vargas. It was her first job.

Now she is most known for singing with the Fiesta Patrias, she performs for Cinco de Mayo and Mexican Independence Day as well as with several mariachis when they need a female singer.

Returning from Sacramento, she is adjusting to the music scene in Watsonville and is preparing to turn away from being a back-up singer.

“The stage I’m at right now is I am branching out on my own — discovering myself and what I can give back to the community,” she said. “The community has been there for me and my family throughout all these decades.”

Saying that she has always been comfortable in her role as someone to call when a female vocalist is needed, she said she is ready to face her fears and strike out as her own headliner.

“This experience has brought it to a different level to me,” she said.

Singing mainly in Spanish and in mariachis, Price said she looks to unite the community with her music.

“It is important for me to stay connected to my roots and sing in Spanish; I feel it brings people together,” Price said. “What I like to do, I like to weave in music in English, and people listen.”

It can be a risk, singing in both languages and styles that include English R&B, as “sometimes when things are different, people shy away,” but so far she said she has received positive responses.

For people who normally don’t listen to Spanish music, the idea is to expose them to a new genre and interest them so they can enjoy the music as well.

“When I pick my sets, I make sure there are a wide range of styles,” she said. “In my experience, non-Spanish-speaking people come up to me and they remember pieces, old classic baleros, and they have had some experience with these classics.”

Recently she achieved what she is calling her first “steady” act at Jalisco Restaurant. On Saturdays, she will be performing solo sets from 6:30-8:30 p.m. at 618 Main St.

“My intention and my purpose is to spark something that will make them feel good about themselves and to share what I feel with other people and to touch people with that,” she said. “Sometimes I will see in the crowd that when I bring that diversity, people do start to make it a conversation piece.”

With no accompanist, she said she has received a positive response.

“Especially this community in Watsonville, you have people listening to different styles of music, just growing up,” she said. “Hopefully this will strengthen my solo performance and be exposed to different people also.”