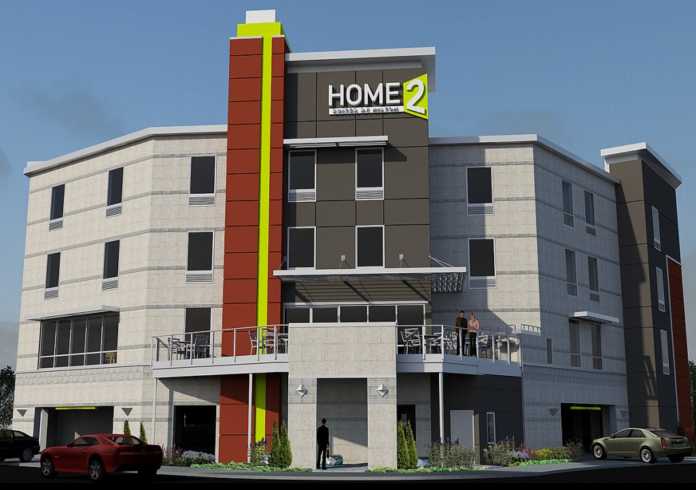 WATSONVILLE — A longtime eyesore in the heart of the city will soon see a major makeover.

In the next 90 days the National 9 Motel at 1 Western Drive will be demolished to make way for a four-story, 80-room Hilton Home2 Suites, according to Kamalesh Patel, of Hospitality AARAV, LLC.

Approved as a La Quinta Inn by the Watsonville City Council in 2016 amidst backlash from neighbors surrounding the half-acre property, the hotel will sit in the intersection of Freedom Boulevard and Main Street just across the street from St. Patrick’s church — often referred to as the “gateway” of the city’s downtown.

Patel said the property has been under his family’s ownership since 1993, and that the redevelopment project started five years ago when he saw the city’s hotels were constantly booked.

“The city was losing a lot of business to other places. When people came to stay in Watsonville or other spots around here [the city was] losing their business to Aptos, Santa Cruz or Monterey,” Patel said. “It was time to get something in there that the city could use.”

It will feature two meeting rooms and a pool, as well as 85 parking spaces, the majority of them underground, for customers and staff, according to Patel.

Home2 Suites is an affordable, all-suite hotel that is aimed at travelers looking to make an extended stay, an option that Patel said was lacking in the city’s short list of hotels.

“This type of hotel really hits the sweet spot for this community,” Patel said. “There’s a lot of people who are here seasonally and need a long-term stay.”

The National 9 Motel is at the corner of Freedom Boulevard and Main Street. Property owner Kamalesh Patel said construction of a Hilton Home2 Suites will begin in the next 90 days. — Tarmo Hannula/The Pajaronian

Currently, the city has eight hotels operating within city limits. Most are heavily booked throughout the year, according to Watsonville City Manager Matt Huffaker, and additional hotels are needed to keep up with the public demand as the city continues to grow.

“Watsonville, similar to Santa Cruz County as a whole, continues to experience strong demand for hotel rooms and we project continued growth in the leisure and hospitality industry,” Huffaker said.

The forthcoming addition of a 112-room Hampton Inn & Suites on Lee Road — expected to be completed by January — should help alleviate the room shortage, and Patel’s development is also expected to give tourists another option.

Those two hotels are also expected to up the city’s transient occupancy tax dollars. Patel’s hotel is expected to generate roughly $200,000 annually in hotel taxes, according to Huffaker.

Patel said the hotel will create 20-25 full-time jobs, and he hopes it will also help the city continue its ongoing plans of revitalizing its downtown corridor.

“Hotels also help support the local economy, as visitors patronize local shops and restaurants during their stay,” Huffaker said. “[This] new hotel is particularly exciting at the entrance of Main Street, as we continue our efforts to revitalize the downtown area.”

The construction of the hotel was a hotly-contested topic four years ago, as it was delayed twice by Watsonville’s Planning Commission before it finally received the OK from the City Council despite public outcry about its size.

Councilwoman Rebecca Garcia was the lone no vote during the hotel’s public meeting in 2016. On Wednesday, she stood by her decision saying that she personally spoke to at least a dozen neighbors who were against it for many reasons.

“I listened and wanted to support them” Garcia said.

She also said she did not support the project because of a density amendment that was needed in order for it to pass. She said she was concerned that if a bar, lounge or liquor store decided to set up shop in the surrounding area that it would also qualify for a density amendment.

“Staff never assured me that would never happen,” said Garcia, who added that residents in the neighborhood still contact her for updates on the project.

Resident Annette-Marie Saiz, who lives just steps from the property, said she was worried about both traffic and noise during and after the construction of the hotel, but said she was happy the dilapidated motel was getting a facelift.

“I think most believe it’s going to be a big improvement over what’s there right now,” she said. “There’s a lot of pride of ownership around here. People care about the look of their neighborhood, so I’m happy they’re cleaning up that corner.”

Watsonville Police Sgt. Mish Radich said that in the last 12 months there have been 27 calls for service at the National 9 Motel, most of which were for disturbances. That figure includes police initiated patrols around the motel, which are not uncommon for a few of the city’s lodging establishments.

There have also been two arrests at the National 9 Motel in the last 12 months, according to Radich.

Patel said National 9 Motel will close in the next 45-65 days.

TONY NUÑEZ - July 1, 2022
WATSONVILLE—Pajaro Valley Arts (PVA) will host a one-day conference on July 9 centered around the figure Our Lady of Guadalupe.  Attendees will explore the historic...