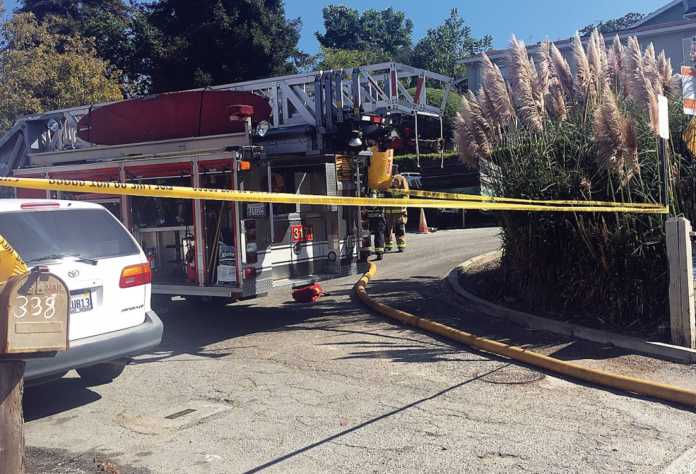 SANTA CRUZ — A Santa Cruz Police officer, a man and a woman were injured in an apartment fire Wednesday on the 300 block of Jessie Street in Santa Cruz.

When fire crews arrived in the Beach Flats community at the lower end of Ocean Street around 9:40 a.m. they were met with a towering column of black smoke and flames emanating from Unit 1 on the ground floor of the two-story, 14-unit complex, Fire Chief Jason Hajduk said. They quickly learned a woman was trapped inside. As they increased their response to a second alarm, a rescue crew burst indoors and hauled the victim to safety.

Police were initially dispatched to the scene for a report of a domestic dispute between a man and a woman at 314 Jessie St. and “an intentionally set fire,” said Joyce Blaschke of Santa Cruz Police.

Washburn, who worked his way up to the second floor, was eventually subdued by police with a Taser and taken to the hospital. He was arrested at the scene for obstruction charges.

Police also developed probable cause to arrest resident Brenda Scott for causing the fire. Scott was flown by air ambulance to an out-of-county trauma center for her injuries. She remains on an in-custody status, Blaschke said.

The officer that was injured, who reportedly suffered from smoke inhalation, was taken to Dominican Hospital.

Firefighters were on the scene past noon. The cause of the blaze is still under investigation, however, Hajduk said it “does not appear accidental.”

The American Red Cross was called to the scene to help find lodging for those displaced. Hajduk said all the other residents at the complex were eventually allowed to return to their apartments.

SANTA CRUZ COUNTY—Over the past few weeks, monolith displays urging residents to get vaccinated against Covid-19 have popped up across Santa Cruz County. The installations...
Read more
Local News

Dozens sound off on food trucks in community forum