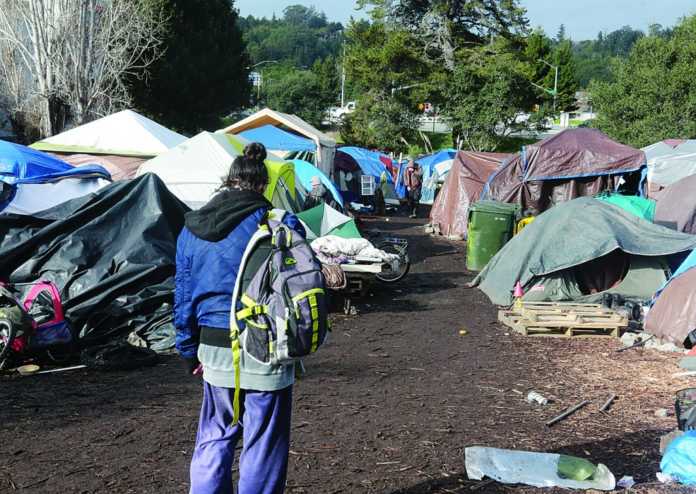 SANTA CRUZ COUNTY — Santa Cruz County saw a slight decline in its numbers of homeless people after the biennial count conducted in January.

County officials released the results of the Point-in-Time Count Monday.

Loss of employment was the leading cause of homelessness, Hoppin said.

One in ten reported increasing rent as the cause of their homelessness, a figure that has more than doubled since the last report.

“These numbers represent a one-time snapshot of homelessness on a particular night in Santa Cruz County,” said John Connery of Applied Survey Research, which conducts homeless census operations throughout California.

Since the 2017 Point-in-Time Count, the Homeless Action Partnership (HAP) and its partners have implemented new programs and systems to improve the community’s response to homelessness, including the continuing allocation of $9.6 million in Homeless Emergency Aid Program (HEAP) funding.

Allocations through HEAP funding have included the establishment of year-round shelters in North and South County and navigation services such as housing, medical and benefits assistance.

Other system improvements since 2017 include programs funded through a $2.2 million federal Youth Homelessness Demonstration Project grant, as well as the establishment of the Smart Path Coordinated Entry System to assess homeless individuals and help allocate limited resources where they are needed most.

The City of Santa Cruz included the highest number of homeless persons of any jurisdiction, with 1,197. That was followed by unincorporated Santa Cruz County, with 515, and Watsonville, with 370.

One area of improvement was in chronic homelessness, which was reduced by one-third since 2017, Hoppin aid.

But the report also shows that youth homelessness is trending upward and that the expensive local housing market is severely inhibiting the transition to permanent housing, with rental assistance and more affordable housing cited as top needs by homeless persons.

The biennial point-in-time count applies a federal definition of homelessness and does not capture all those experiencing housing instability, including adults and children living with friends and family, or those in hotels, hospitals or jails on the night of the count.

While the County Office of Education and local school districts helped identify 75 students and family members experiencing homelessness, the Pajaro Valley School District also counted 3,304 “students in transition” living with friends or family during the 2018-19 school year, a figure not represented in the point-in-time count.

The results are contrasted by counts in other counties such as Contra Costa, San Francisco, Santa Clara, and Alameda, which show “significant” increases in homelessness, Hoppin said.

Counties such as Marin, Santa Barbara, and San Diego have seen declines.

The full report will be posted at www.appliedsurveyresearch.org.