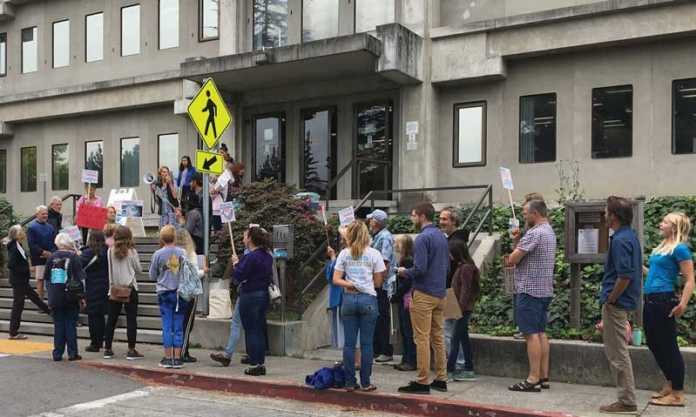 SANTA CRUZ — The Santa Cruz County Board of Supervisors on Tuesday agreed to ban the sale of plastic water bottles at county facilities, and told Public Works staff to create an ordinance that would require a fee for single-use cups at food service establishments.

In an effort to curb the millions of disposable contact lenses that wind up in the waterways, the county will investigate the availability of recycling programs to determine whether an ordinance is necessary.

The discussion comes as jurisdictions around the world look to reduce their consumption of plastic, which is increasingly filling oceans, clogging waterways and harming wildlife.

“It’s sickening, the level of plastic pollution and the way it’s infiltrated every aspect of our lives,” Supervisor Ryan Coonerty said.

It also came as plastic waste becomes increasingly harder to recycle. China in 2018 stopped accepting recyclable plastic from the U.S., and on Tuesday recycling company RePlanet announced it was closing all 284 of its centers, two of them in Watsonville.

The supervisors will meet later this summer to consider the ordinances.

“The issue of plastic pollution is real,” Supervisor John Leopold said. “This board has worked on it before, and we will continue to be a leader in this issue.”

The discussion followed a rally outside the county building by Save Our Shores, which convened several people to address the board about the issue.

“Our supervisors have always been environmental leaders, and now is the time for them to step up yet again,” said Executive Director Katherine O’Dea.

Abigail Goodman, 13, came to the rally with her sister and her father. Her environmental activism has included beach cleanups.

“I want to help get rid of plastics,” she said. “It’s really bad for the environment. It’s disturbing; plastics just don’t go away, and they keep making more.”

Gail McNulty of Save Our Shores called the proposals a “step in the right direction” to eliminating plastic waste of all types.