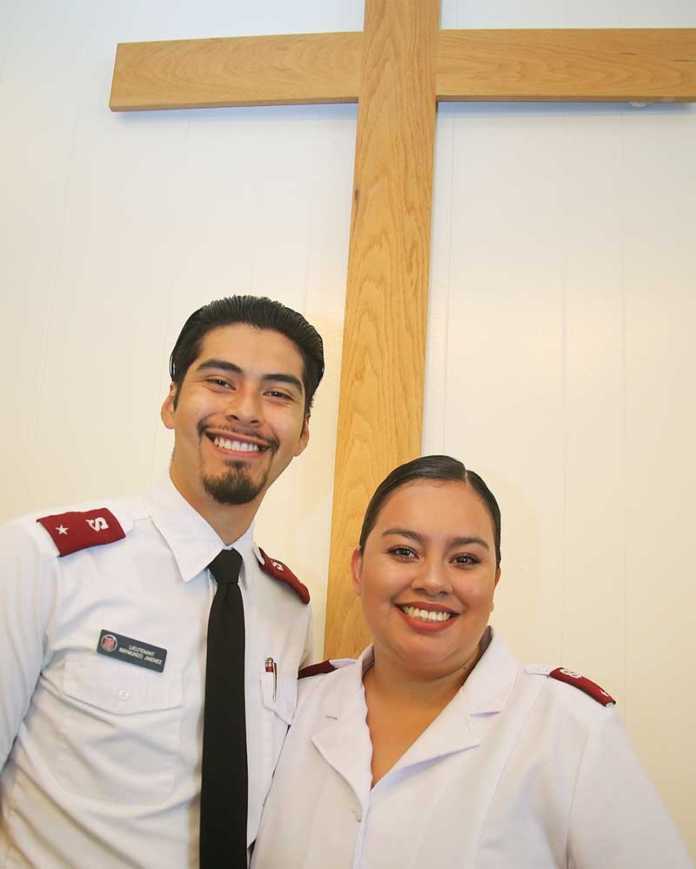 WATSONVILLE — When Thelma Jimenez was a young girl growing up in Albuquerque, N.M, her family was suffering from homelessness. So they turned to the Salvation Army for help.

Through that organization, she attended a Bible vacation camp with her brother. Years later, she is a Salvation Army lieutenant running a Bible camp at the Watsonville location.

Thelma Jimenez, 25, and her husband Raymundo Jimenez, 23, began their service as Salvation Army lieutenants on June 27.

Thelma said she wants to provide the same service she receives as a child, when the organization helped lift her family out of homelessness.

“The Salvation Army is home for me,” she said. “They gave us toys when we were little, they provided food for us, they gave us jackets when we did not have any. The officers became our family; they treated us like people. That introduced us to a new hope.”

The couple was commissioned as officers – and ordained as ministers – three years ago. They have also served in San Jose and San Francisco.

Raymundo Jimenez said he attended church through the Salvation Army as a young boy in Southern California and became more involved when he realized the breadth of community services the organization provides, with locations in 130 countries.

His older brother is serving as an officer in Homer, Alaska.

“At that time I had no idea the Salvation Army was bigger than just church on Sunday,” he said,

The couple ran after-school and youth programs at their previous locations. Their Watsonville assignment has a slightly different focus.

“But here, clearly homelessness has been an issue for some time, and it’s rising,” Raymundo Jimenez said.

“That’s primarily where our focus is, serving the community through our navigation center. Getting people off the streets.”

The Navigation Center provides a wide variety of services for homeless people.

“It’s a lot of work, but that’s what we’re called to do,” Raymundo Jimenez said. “We’re happy to do it. I feel like this is a calling. It’s God leading us to different areas in our lives to serve in different ways.”

TODD GUILD - June 21, 2022
In the fall of 2013, Cabrillo College celebrated the opening of a remodeled and expanded Science, Technology, Engineering and Math (STEM) center in Aptos. After...