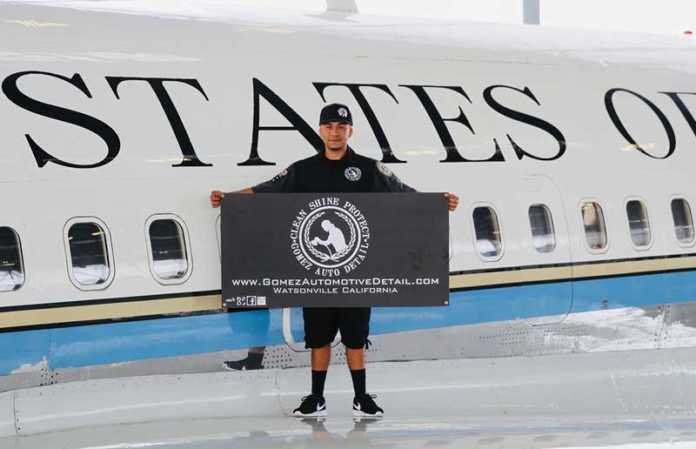 WATSONVILLE — Angel Gomez said his passion for vehicles started at a young age.

When he was a child, he helped his dad, Benjamin, work on his 1970 Chevrolet C10, and by the time he was in middle school, he could name the make and model of most cars by simply looking at their taillights.

“I love cars, all types of vehicles, really,” Gomez said.

That lifelong love has guided Gomez to the top of his profession and to what he called a “revolutionary” experience.

The Watsonville native and owner of Gomez Mobile Auto Detailing was selected for the prestigious 2019 Air Force One Detailing Team at Seattle’s Museum of Flight.

Gomez, a 2007 Watsonville High School grad, beat out hundreds of detailers from across the nation for a spot on the 55-person team that was tasked with restoring, maintaining and protecting the original presidential Air Force One and more than a dozen other historic aircraft on exhibit at the museum’s Airpark Pavilion.

In addition to Air Force One, which is currently in preservation stages after 15 years of restoration, the team in early July restored a solid aluminum World War II B-29 Super Fortress Bomber and a recently acquired and badly-deteriorating Vietnam-era B-52G Stratofortress Bomber.

“It was a very unique experience,” Gomez said. “It was something that I never thought I would do in my wildest dreams.”

Gomez, who details and maintains all types of vehicles throughout the Central Coast, said he had to postpone several business opportunities to make the trip to the Pacific Northwest and take part in detailing the historic aircraft.

“I had to make some sacrifices, but this experience was worth it,” he said. “I learned so much.”

For a full week, Gomez worked, ate and lived alongside some of the top detailers from across the U.S. and tried to soak up every word of advice — both about detailing and business — as each day went by. He also got a private tour of Air Force One and talked to a few of the WWII pilots that flew the fighter jets he was working on.

At the end of the week, he was honored with an award for outstanding performance and was sent home with a golden coin as a souvenir from his time aboard the flying Oval Office.

“It was just an honor to be a part of that,” Gomez said. “How many detailers get to work on these aircraft? It’s a once-in-a-lifetime experience.”

Gomez was handpicked for the job by renowned detailer Renny Doyle, of Detailing Success. Gomez last year trained under Doyle in Big Bear to further hone his skills in paint correction and general detailing.

“[Gomez] has an eye for detail and an instinct for perfection that is an absolute must for this project,” Doyle said.

The original Air Force One for more than a decade lived on the open tarmac exposed to Seattle’s notoriously harsh climate.

In 2003, a Bush-administration executive contacted Doyle about saving the deteriorating paint and brightwork on the iconic plane. Doyle, known for his skill at paint correction and restoring the shine on classic cars, as well as his knowledge in caring for expensive car collections, exotics and aircraft, has since meticulously restored and maintained the aircraft with the help of volunteers each year.

Gomez said he started getting paid to work on vehicles in high school. He detailed golf carts at one of the local courses and started making connections with the golf aficionados, who would hire him to detail their cars on the side.

More importantly, it kept him busy and off the street. Gomez said he grew up on Grant Street — one of the city’s tougher neighborhoods during his childhood — but always made sure to keep himself preoccupied with school or one of his two passions: cars or boxing.

“If it wasn’t one, it was the other,” Gomez said. “I strongly believe that you don’t have to be a product of your environment. If you have a passion, whatever it is — boxing, cars, sports — pick up some books, learn everything you can about it and just pursue it. Go after it.”

Which is exactly what he did five years ago when he quit his job in the counseling department at Santa Cruz High to pursue car detailing full time.

“It was rewarding working with kids,” said Gomez, who at first went to Cabrillo College looking to study criminal justice, “but my passion for cars was too strong.”

Today, he has clientele that dots the map from Scotts Valley to Monterey, and he works on old-time classics, every-day commuters and modern-day luxury vehicles.

He also has plans of opening up a detailing shop soon but is still looking for the right location.

For now, he said he’s more than comfortable flying from location to location and making his clients feel presidential with his services.