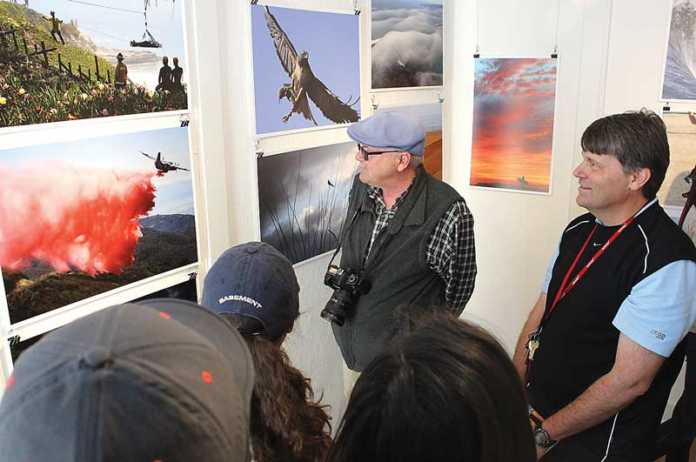 WATSONVILLE — From images of civil unrest in the past to the present day-to-day life in Santa Cruz County, Pajaro Valley Arts has brought the work of five photographers together in its latest exhibit.

Judy Stabile, who curated the exhibit with Liz Reid, said the show speaks to issues of labor rights and social equality.

“This show was guided by the vision of Tarmo and Shmuel,” she said.

Hannula, who has worked as staff photographer at the Pajaronian since 1997, said he was “honored to have been tapped to take part in this exhibit.” In 2016, Hannula received first and second place awards for best artistic photo and best news photo in the California Newspaper Publishers Association’s Better Newspapers Contest Award.

“Photographing the Pajaro Valley and surroundings has been such a rich and rewarding experience for me, and I feel very fortunate to be able to share my images with the public,” he said.

As a result, Hannula added that he learned “so much” about the ins and outs of the Pajaro Valley, from agriculture, law enforcement, the arts and more.

“I would hope that people visiting the exhibit look deeply into the photos and come away with a better sense of what goes on in their community, both in the tragedies that occur and the wonderful and awe-inspiring,” he said.

“I am continually struck by the honor and responsibility of creating the visual historic record of our time here in Santa Cruz County and I am so grateful to be sharing the walls of PVAC with these great photojournalists,” he said.

Former Watsonville resident Bob Fitch, who died in 2016, is best known for his photos of social justice movements during the 1960s and 1970s. He extensively photographed Martin Luther King Jr. and Cesar Chavez.

Vestal was posthumously inducted into the 2016 Watsonville High School Hall of Fame. He worked at the Pajaronian from the 1950s through the 1980s, and his photograph of Santa Cruz County District Attorney Charles Moore leaving an illegal gambling parlor netted a Pulitzer Prize for the newspaper in 1956.

His daughter, Kim Vestal, said the exhibit “will not only bring back fond memories for local residents who remember him, but also introduce a brand new generation of photography enthusiasts to his incredible body of work.”

“The Vestal family is beyond thrilled to have some of our father’s most treasured photographs featured in this exhibit,” she said. “For over 50 years Sam was a local fixture in the Pajaro Valley capturing the area’s history with his lens. Since his death 15 years ago, most of his collection — thousands of photos — have been stored away: amazing photos that we feel should still be shared with the world.”

Ravetz, who died in 2016, worked to photograph homeless people on the street, often photographing them with their faces concealed and only their eyes visible. Capturing the stories of people down on their luck was something that he was passionate about, said his wife Harriet Maglin.

“It’s really quite incredible,” she said of the exhibit. “He would be really pleased.”

“Witness: Photojournalism” opens Wednesday and runs through May 21 at Pajaro Valley Arts, 37 Sudden St. in Watsonville. An opening reception is scheduled on April 23 from 2-4 p.m. at the gallery. For information, call 722-3062 or visit pajarovalleyartscouncil.org.