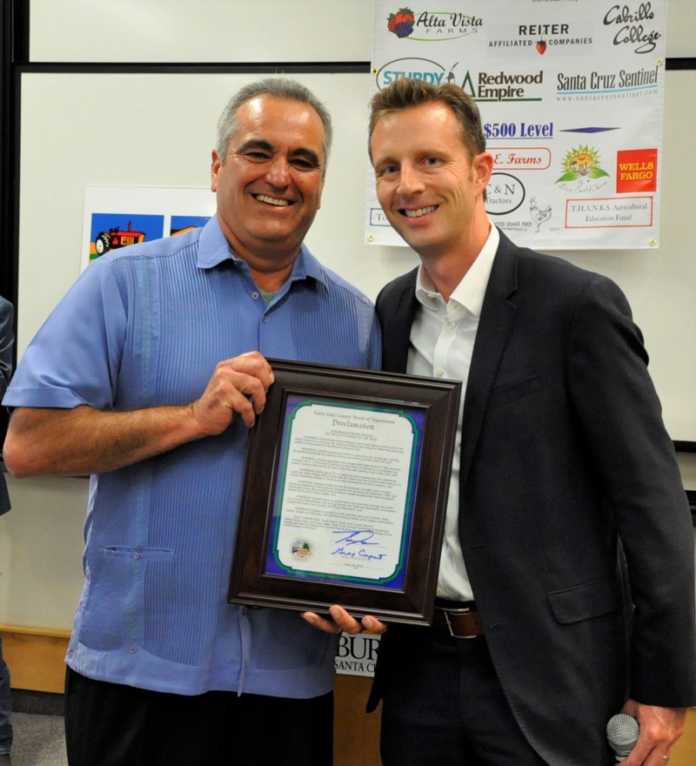 Edward Ortega of Ortega Berry Farms was recently selected by the Santa Cruz County Farm Bureau as the 2019 Farmer of the Year.

“Most farmers, we work, work and work… to be able to take a step back and be honored by the Farm Bureau; it’s nice,” Ortega said.

In a press release, the Santa Cruz County Farm Bureau (SCCFB) Board of Directors said they honored Ortega “because of his leadership in the berry industry along with all of his involvement in the community.”

“This award is presented annually to the farmer who has contributed beyond their normal farming duties to help the community,” the Board of Directors said through the press release.

Ortega, once the President of the SCCFB, has served on the Board of Directors of the California Strawberry Commission, and provides annual tours for the Focus Agriculture Class, a nine-session program that teaches attendees about the broad spectrum of agriculture, including production and labor, government relations and politics and marketing and competition.

He was also a participant of Leadership Santa Cruz County, which educates, fosters connection and increases awareness and participation of individuals in leadership roles throughout the county, helping them address issues, needs and opportunities facing the county now and into the future.

Ortega was also an asset for the Palma High School mountain bike team while his son, Daniel, competed at the Salinas-based private school. Ortega helped coach George Garibay taxi the student-athletes and their bikes to competitions around the state.

“I don’t ask my parents for a whole bunch, but he went above and beyond,” Garibay said.

Ortega would also haul his mobile pizza business, Fired Up Fresh, to competitions to feed the team, parents and volunteers at no cost. It wasn’t uncommon for Ortega to also feed the student-athletes from other Salinas teams, like Salinas High.

“Things like that build a community,” Garibay said. “It’s more than just a team. It’s a community, that’s the real team…I think [Ortega] really understands that.”

The presentation of the award was made during the Farm Bureau’s 102nd Annual Meeting and Dinner held at the Cabrillo College Horticulture Center & Botanic Gardens in Aptos.

The theme of the evening was “Farm to Market.” Gary Bascou, co-Owner of Staff of Life, was the featured speaker. Bascou spoke about the history of the company and the future opening of the store in Watsonville — slated for early 2020.

Born in Morelia, Michoacan, Mexico, Ortega and his family immigrated to the United States when his father, Alfredo, took advantage of the Bracero Program, an agreement between the U.S. and Mexican governments in the 1940s that allowed millions of manual laborers from Mexico to cross the border for work.

Ortega’s father worked as a strawberry truck driver during the day and a used car salesman at night.

At 8, he joined his parents and siblings picking strawberries in the field; backbreaking work that came with a few advantages — such as driving the tractors, pickup trucks and three wheelers that were littered around the fields, and having some spending cash in his pockets.

Working in the fields also gave him the opportunity to spend valuable time with his family.

“You’d be out there working really hard together and then you’d sit down and have a family lunch,” Ortega said. “That was the best part, being able to be with the family.”

Ortega graduated from Watsonville High School in 1983, and went on to earn a bachelor’s degree in electronic engineering but quickly realized the constraints of the cubicle life were not for him.

In 1987, Ortega started his business, Ortega Berry Farms, with only $5 in his pocket.

As his acreage increased — thanks in part to help from the Dobler and Peixoto families — Ortega’s business evolved into a grower/shipper and partnered with the Rodoni and Koontz families to establish Beach Street Farms. He and the Rodoni family eventually partnered with the Kelly family to market strawberries under the Beach Street Farms and Colleen labels, also known as CBS Farms.

Ortega said the numerous hours of hard work from his wide-ranging web of employees is the reason for his company’s ascension.

“All those people are what make farming tick,” he said. “No one man can do this by himself.”