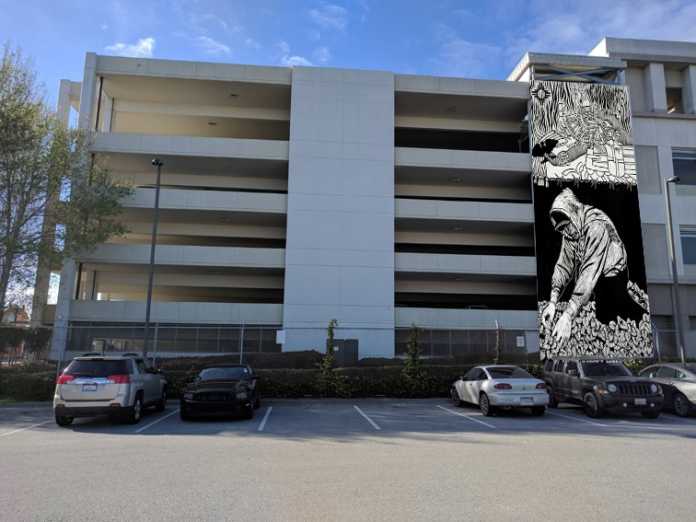 WATSONVILLE — The Watsonville Parks & Recreation Commission on Aug. 5 approved the first image for “Watsonville Brillante,” a 12,000-square-foot mosaic planned for the exterior of the Civic Plaza parking garage.

“Strawberry Picker,” a black and white work from Watsonville native Juan Fuentes that depicts a Latinx fieldworker shadowed by an indigenous ancestor, received unanimous approval from the commission at the public meeting.

Kathleen Crocetti, the local artist heading up “Watsonville Brillante,” said more than 360 of the nearly 500 people who voted on the eight available works selected “Strawberry Picker,” which will fill up one of three large walls along the garage.

“It was the clear choice,” Crocetti said. “I think it resonated with the most people.”

The approval of the work wrapped up Phase 1 of the multi-part, $1.5-million project that will be completed over the next five years.

The installation of the approved art is not expected to start until the spring of next year. Rinaldi Tile & Marble of Watsonville will provide the installation services, while Fireclay Tile of Aromas will donate the tile.

Phase 2 of the project, which will fill 35 of the 184 horizontal panels along the six-story garage, is currently underway.

A bilingual call for local artists was made public at communityartsempowerment.org and will run until Sept. 26.

Crocetti said the call for artists is open to all Watsonville residents and people who live within a 10-mile radius of the city.

There is no age restriction for the call for artists, who will be paid $100 if their design is selected.

An informational meeting regarding the call for artists is scheduled for Aug. 21 at Muzzio Park Community Center, 26 W. Front St., from 5:30-7 p.m.

Crocetti said she hopes to receive diverse submissions for Phase 2, and that she has already visited representatives from the Buddhist Temple and the Japanese American Citizens League to ask for submissions.

When completed, “Watsonville Brillante” will be a representation of the numerous mixed heritages in Watsonville with each panel describing a different group and joining one family to another, Crocetti said.

Crocetti’s horizontal section of “Watsonville Brillante” will feature her Italian-Irish-Croatian heritage, which can branch off to numerous paths.

“There’s going to be this giant thread that shows all of our connections to each other — like one giant family,” she said.

Phase 3 will be a vote for the next large image.

Crocetti said the community will be able to vote on art from both Fuentes and Melissa West, a Santa Cruz-based artist that specializes in woodblock prints.

The final approval of any images for “Watsonville Brillante” will be up to the Parks & Recreation Commission.

The Watsonville City Council unanimously approved “Watsonville Brillante” earlier this year, and also OK’d an agreement with Crocetti that will allow her to lease the Muzzio Park Community Center for $1 a year over five years.

The city also waived the estimated $10,500 building permit fees and will spend $60,000 to prepare the concrete surface for installation through pressure washing and sandblasting.

Crocetti added that the project will be cost savings for the city in the long run, as the parking garage is due for a repaint every seven to 10 years.

“The tile is going to completely seal the exterior of the garage,” she said. “It’ll be completely deferred maintenance.”

Fuentes, a 1969 Watsonville High graduate, provided all eight works for the Phase 1 vote. On top of running a print shop in San Francisco, Pajaro Editions, he teaches art at San Francisco State.

“Watsonville Brillante” aims to represent all Watsonville residents and their heritage. To make sure your heritage is included in the ambitious project fill out their short survey at communityartsempowerment.org/survey/.