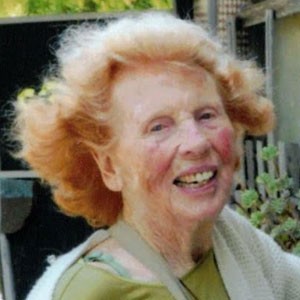 Margaret Ogle, a resident of Corralitos, CA, died August 7 at her home.

She is survived by her son, Terry; three grandchildren John Ogle, Lily Rogers, and Aaron Dover; and two great grandchildren, Noah and Jaime. She was preceded in death by her husband Hal, and her daughter Judy.

Margaret Elsie Henderson was born in Vancouver, WA, on December 16, 1921, to Alexander Winchester Henderson and Gail (Smith) Henderson. She graduated from Vancouver High School in 1939, and attended Linfield College, where she met her husband, Harold L. (Hal) Ogle. They were married on December 6, 1941. During World War II, Margaret worked in the Kaiser Shipyards in Vancouver while Hal was overseas in the Army. After the war, they settled in Vancouver, and raised their two children.

The family moved to Santa Cruz in 1964, where they opened a hardware store in the East Cliff Village shopping center. Hal died in 1968, and Margaret went to work at Cabrillo College. Margaret was involved in the arts all her life, working in a variety of mediums. She built and remodeled several houses, and made over one hundred Japanese rice paper lamps. She was known for her beautiful photographs. She spent her retirement traveling around the world and continued to do so even after becoming legally blind over twenty years ago.

She was lucky to have a group of dedicated and caring friends, including Nancy & John, Carole, Kristin, and especially Joann Gallagher, without whom she would not have been able to live in her own home for the last ten years of her life.

A private memorial service has already been held, per Margaret’s wishes.