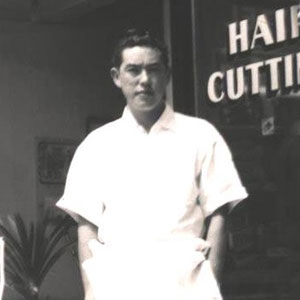 Fred Utaka Oda, resident of Watsonville, CA, passed away peacefully on September 27, 2017 at the age of 94.

He is survived by his two daughters, Becky Henry (Steve) and Diane Onizuka (Victor), grandchildren Matthew Henry, David Henry, Lauren Henry, Michelle Onizuka and Ryan Onizuka and brothers John Oda and Jack Oda.  He was preceded in death by his wife Betty Oda (Fujita) in 2014.

Fred was born in Watsonville, CA to parents Tokuzo and Toku Oda who immigrated from Hiroshima, Japan in early 1900.  He graduated from Watsonville High School in 1941.  At the beginning of WWII, he and his family were removed from the Pajaro Valley and taken to an internment camp in Poston, AZ.  Eventually, Fred was released from the internment camp and relocated to Milwaukee, WI to work until he was drafted into the U.S. Army.  He returned to California just as the war ended and decided to follow in his father’s footsteps as a barber. He attended Barber College, and in 1949 apprenticed under his father, Tokuzo, in the barber shop he opened in 1912.  Oda’s Barbershop was considered a historical landmark in what was once Watsonville’s Nihonmachi (Japantown) and it was there that Fred worked until his retirement in 2007 after serving his patrons for 60 years.

Fred and his wife Betty were very active in the Watsonville Buddhist Temple for many decades.  They belonged to the Adult Buddhist Association (ABA) Club, the Japanese American Citizens’ League and the JACL Senior Center.  Even after Betty’s passing, Fred continued his participation and enjoyed volunteering in numerous church and club events.

Fred enjoyed many outdoor activities.  One of his favorites was surf fishing because he could cast his line into the ocean and then take a short nap!  On Sundays he would take his family on outings to the beach or to the mountains which included picnics and nature walks. He loved to read and kept his mind active solving puzzles of all kinds. His mood for the day often depended on whether he was successful in solving the daily Sudoku in the newspaper!  Fred and Betty loved ballroom dancing and could often be seen enjoying themselves on the dance floor at weddings and celebrations.

Fred’s gift for gab was legendary.  His witty and playful conversations kept his customers, family and friends entertained!  Fred described his greatest joy as watching his grandchildren grow up and succeed in their endeavors.  He took great pride in all of their accomplishments.

In his 94 years, Fred lived humbly, enriching the lives of others with his selflessness and compassion. We miss him dearly and his memory will live in our hearts forever.

A private memorial will be held in his memory.