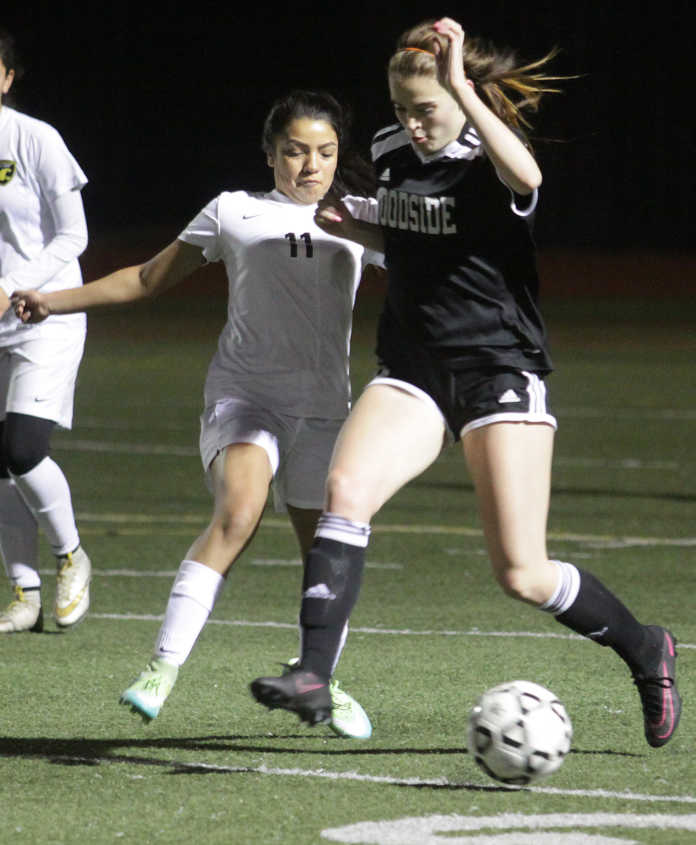 WATSONVILLE — Sometimes a loss can be more than just a loss.

The upstart Watsonville Wildcatz believe Wednesday night’s 1-0 Central Coast Section Division I defeat at the hands of powerhouse Woodside falls under that category.

No. 12 Watsonville, which has never won a playoff game, let alone a CCS title, not only played toe-to-toe with the last year’s Open Division champ but had a shot of sending the game into overtime and buying itself a few more minutes at the upset.

Junior striker Gabby Felix drew a late foul and junior midfielder Annalee Robledo took the last-chance free kick from 40 yards out but her boot sailed high and No. 5 Woodside (11-6-3) survived.

In the record books, it will go down as Watsonville’s (11-5-4) seventh straight CCS loss. But in the minds of the Wildcatz, who were in the playoffs for the first time since 2012, the night under the bright lights of Emmett M. Geiser Field was progress, if not a complete revival of a program that was just three calendar years removed from a winless season.

“I believe that we sparked hope this season,” said Watsonville senior keeper Ina Gonzalez, holding back tears after her final game for the Wildcatz. “I feel like that once we’re gone, I know the girls will keep pushing. They’ll reminisce and say, ‘remember when we got to CCS? Let’s get there again.’ I feel like we just set a goal for them — for the future generations. So they can keep striving to accomplish this goal and maybe go further.”

While Watsonville’s boys have been a year-in-year-our section juggernaut, winning 11 CCS titles under legendary head coach Roland Hedgpeth, the same could not be said about the girls.

This year’s Monterey Bay League Pacific division champions made the playoffs six straight times from 2007 to 2012 and not only lost in the first round on each occasion but were thoroughly dominated, losing by at least two goals in each game and being shutout in all but one.

Early on it looked like that ugly trend would continue after Woodside, which has won two CCS titles and lost only 11 games over the last five seasons, scored during the 13th minute when Daisy Jimenez cleaned up a corner kick. But Watsonville settled in and gave the Wildcats all they could handle.

“We didn’t know a lot about [Watsonville] but we learned a lot about them today,” said Woodside head coach Jose Navarrete. “They played with a lot of heart. They played very inspired. We fought for our lives today. They gave us a really good game.”

Watsonville had few scoring opportunities, as Woodside dominated the middle of the field and made the Wildcatz’ defense work from whistle to whistle. The home team’s back line did well enough to keep Woodside’s short-and-crisp passing game to a minimum but the Wildcats’ forwards and wingers probed inside Watsonville territory plenty.

They found only a brick wall between the pipes, however. Gonzalez, who will play college soccer at Cal State East Bay next season, finished with eight saves — a trio of stops being of the jaw-dropping variety — to keep her team in it.

“She gave the confidence to our team to move up and go forward,” said Watsonville head coach Gladys Mondragon. “She was awesome.”

But her offense could not reward her efforts with a score. Woodside’s constant pressure erased any chance of getting the ball to Felix, Watsonville’s goal-scoring machine who finished the year with 25 scores.

The Wildcatz’ best chance at a goal came during the final seconds of the first half, when Robledo’s free kick from close to midfield bounced dangerously in front of the cage without being cleared. But Watsonville could not reach it in time before it made its way out of bounds.

“They played it all the way through, they put a lot of pressure, they focused and they felt like they had the opportunity to win it,” Mondragon said. “We were fighting against time at the end. It was a tough battle.”

Watsonville will graduate six players — Fabiola Molina, Jennifer Escoto, Maritza Lopez, Shaniah Rocha, Xochitl Martinez and Gonzalez — but will have plenty coming back for next season, when they will move up to the MBL’s upper division, the Gabilan.

Mondragon said there’s plenty of work to be done from now until the start of next season but added that her team has proved it can compete with some of the best of the section.

“We had the confidence that we have the players to be in the other league,” Mondragon said. “We know we can compete there and playing a CCS game, playing against Woodside — the defending champions from last year — we know we can play with any team.”