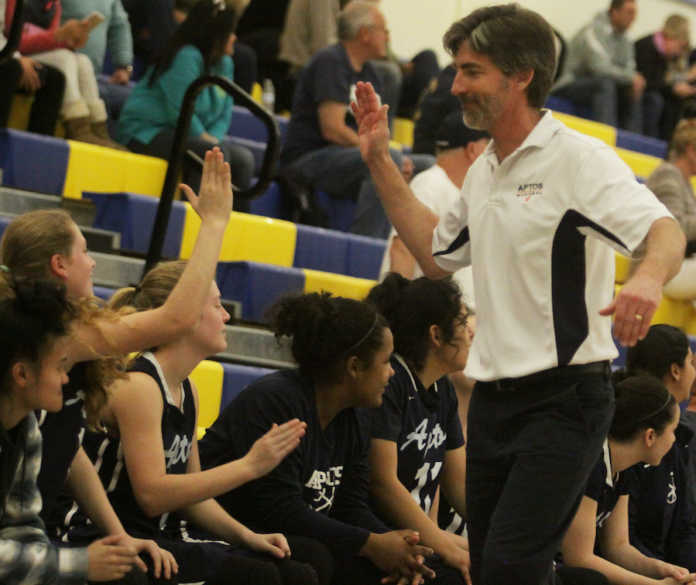 In three years, the Aptos Mariners went from a first-round exit in the Santa Cruz Coast Athletic League tournament to the program’s first Central Coast Section title in more than 30 years.

The father-daughter duo of Stefan and Hannah Hocom, both of which have been at the heart of the Mariners’ rebirth, were recognized by the league for the accomplishment.

Stefan was named the SCCAL co-Coach of the Year and Hannah earned a spot on the league’s five-player First Team.

Everything finally clicked for Stefan in his third year as the Mariners’ head coach. Aptos finished with a 26-5 overall record and won its aforementioned historic CCS Division III title this season. They also impressively won the Watsonville High Tournament and the North Salinas High Sportsmanship Classic, while finishing runner-up in the Cupertino Classic and the end-of-season SCCAL tournament.

The Mariners’ impressive season came to a close on March 8 in the first round of the NorCal D-III state playoffs via a heartbreaking 71-63 loss to Moreau Catholic.

Stefan shared the honor with Soquel’s Kanani Thomas, who led the Knights to the outright SCCAL title and a runner-up finish in CCS behind Aptos.

Hannah, meanwhile, led Aptos in scoring with 15.1 points per game and was deadly from behind the 3-point line, hitting 72 shots — good enough for 24th in the state, according to maxpreps.com — and shooting 34 percent from deep. She also shot 77 percent from the free-throw line and 41 percent overall.

Hannah, a sophomore, played her best basketball down the stretch, scoring in double-figures in 11 of her final 13 games. She averaged 16.8 points per game and shot 48.9 percent from the field during that stretch. She scored a season-high 27 points in the NorCal playoffs against Moreau Catholic.

Sevilla paced the Sharks in scoring (15.2 points per game) and was also third in rebounding (3.5 rebounds per game) as a guard.

She scored in double figures in all but two games this season and poured in 20 points or more in seven games, including an incredible 23-point performance in the CCS D-V championship game against Woodside Priory.

Behind Sevilla, the Sharks finished 13-10 overall and 6-6 in SCCAL play, while making their fourth section final in the last five years.

Their season finished up in the first round of the NorCal D-V playoffs in a 58-52 loss to International of San Francisco.