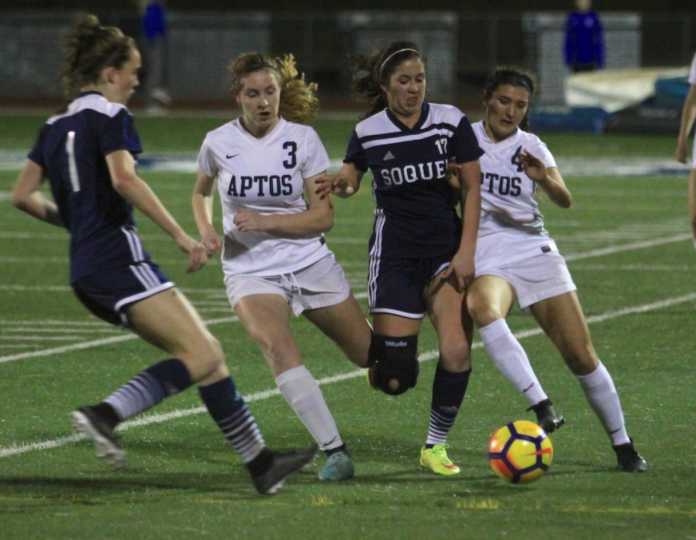 APTOS — On a night in which the Aptos High Mariners honored a pair of stars from the past, a handful of current stars stepped up to keep the team rolling.

With the triumph, Aptos improved to 9-3-2 overall and 7-1 in SCCAL action, helping the Mariners zero in on their fifth straight league championship.

With four games to play, the race to the SCCAL title has turned into a two-horse runoff between Aptos and Scotts Valley High, which sits at 5-1-1 in league play.

The two teams are set to meet on Feb. 8 in a match that could decide the league title.

“We’re not worrying about that at all right now,” said Aptos head coach Jessica Perkin. “In our mind, it’s a battle every game. Tonight was a big game, but now we’re on to Harbor.”

Aptos made Gina Castaneda (class of 1993) and Kim Peterson (1988) the inaugural class of the girls’ soccer Hall of Fame at halftime, and two minutes after the ceremony Veldhuis sped down the home side of the field, dished the ball into the box and Pruett converted to send the dozens in attendance into a frenzy.

Miller made a pair of clutch saves over the final 20 minutes, and the Mariners’ defense made a handful of big plays down the stretch to avenge their 2-1 loss to Soquel earlier in the season, which brought an end to their 41-match unbeaten streak against league opponents.

“It was like war,” Veldhuis said. “We were all trying so hard to get that goal. Soquel did an amazing job. They put their blood, sweat and tears out there, and so did we.”

Things got a bit chippy during the final 40 minutes, as players constantly crashed into one another while fighting for the ball. It was somewhat of a product of the physical play in the first half, which resulted in a pair yellow cards and two early injuries that looked serious.

Soquel’s senior defender Sequoya Hilton exited with a head injury midway through the first half, and Aptos played nearly the entire game without senior defender and captain Mary McGinn, who was undercut while trying to win a ball in the air and took a hard spill on her back.

Senior Marylu Escutia, normally a forward, subbed in for McGinn, and did well enough along side senior captain Grace Rothman, freshman Chantal Aguirre and sophomore Brynn Mitchell to make up for the loss of McGinn, who was in good spirits after the final whistle.

“Our defense is honestly amazing,” Miller said. “Most of the time I get shutouts because the ball doesn’t even make it to me. My defense, I could not ask for better defenders.”

Miller was tested only twice in the second half, and three times in total. Her biggest threat came during the final five minutes on a strong cross into the box, but the sturdy keeper leapt in front of a Soquel forward and smothered the Knights’ final chance to help the Mariners continue their resurgence.

“It’s tough because we did have a legacy, but at the same time it just gives us a chance to build a new one,” Miller said of the early season loss to Soquel. “Honestly, I think it’s good to feel losses. Obviously, we appreciate wins way more after we lose. We were bummed, but that just made us more pumped to come out tonight and put it away.”

Aptos attacked early and dominated the flow of the game through the first 40 minutes, racking up eight shots on goal and eight corner kicks thanks to endless offensive pressure from senior midfielders and captains Monserrat Hernandez Marquez and Paige Dueck, and junior forwards Olivia Meier and Veldhuis.

Hernandez Marquez looked to have hit pay dirt in the 28th minute on a laser from 24 yards out, but after a quick chat the officials decided the ball had missed its mark high by a few inches.

The teams went into the half knotted at zeros, but it didn’t take the Mariners long to finally find the back of the net after the break.

“We just keep improving every game, we get closer every game,” Veldhuis said. “We’re becoming more and more of a family now.”

The inductees of the girls’ soccer Hall of Fame are expected to be honored with plaques on a wall at the south end of Trevin Dilfer Field.

Castaneda was a four-year all-league selection, and was also named the SCCAL Offensive Player of the Year while at Aptos. She helped the program to a pair of SCCAL championships in the early ‘90s, and four straight Central Coast Section playoff berths, too.

Already a member of the Aptos High Sports Hall of Fame, Castaneda is known in the Santa Cruz County and Watsonville community as an accomplished probation officer who founded the Aztecas Soccer Program, an athletics intervention program that helps Latino juvenile probationers connect through the beautiful game.

As a sophomore, Peterson was part of the school’s first-ever officially sanctioned girls’ soccer team in 1986. She was a captain each of the following three seasons, and led Aptos to a trio of SCCAL titles while also earning M.V.P. honors in each season.

Currently a captain with the Fremont Police Department, Peterson went on to star for three seasons at Stanford before playing professional soccer in Japan.

“Not only have they represented Aptos on the soccer field, but look how they’ve taken the lessons they’ve learned from being on a team and playing for Aptos,” Perkin said. “The outreach in the community and the impact they’ve had has been phenomenal. As women, too, it’s great to have these amazing women role models out in the world making an impact through the sport and in other ways.”

TONY NUNEZ - October 19, 2021
WATSONVILLE—Judy Gittelsohn has big plans for the downtown Watsonville arts scene. For the past two months, Gittelsohn has been slowly but surely moving her artwork,...