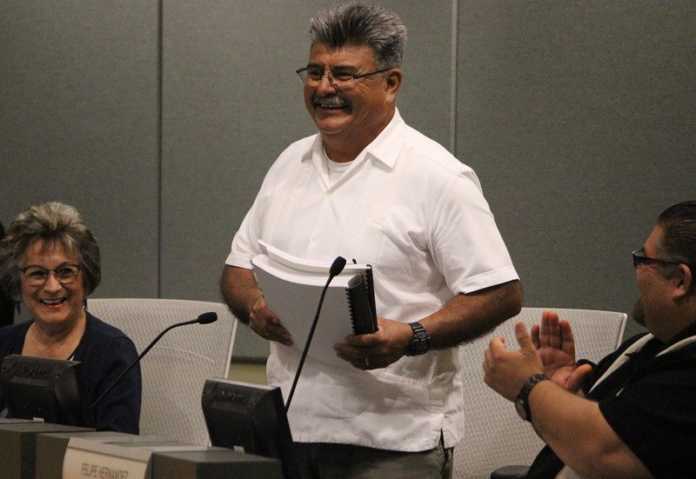 Gonzalez, a longtime Watsonville resident, graduated from Watsonville High School and attended Cabrillo College. He served in the Army National Guard for 12 years, and recently retired from the construction trade.

“It is truly an honor being here today in these chambers,” he said. “This is possible because of the friends and neighbors that helped me achieve a dream that I thought would not be possible. But with the encouragement of my family and friends, I knew we could do this.”

Gonzalez has served on a number of boards over the last 30 years, including the Watsonville Planning Commission, Santa Cruz County Housing Authority, Pajaro Valley Unified School District Budget Committee and others.

He will fill the remaining two years of the term.

Gonzalez said he heard a variety of concerns while he walked throughout District 2, such as traffic issues, infrastructure needs, downtown revitalization and more.

“As a councilman, these are the items I plan to be working on,” he said. “During the remaining two years, I will work with my fellow councilmembers to better the city of Watsonville and meet the needs of the residents.”

After Gonzalez was sworn in, Montoya thanked the council in his last meeting before he starts his new position in Avondale, Ariz. He gave his seat to Huffaker, who was hired by the council in June after serving two years as Watsonville’s assistant city manager.

“I’m going to miss the community,” Montoya said. “I’ll be looking to the west and paying attention.”

The next city council meeting will be held Aug. 28 after a summer break.