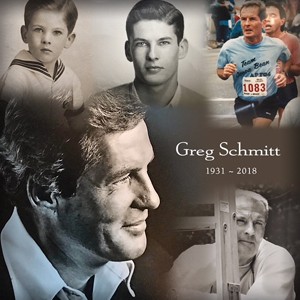 Friends and family are mourning the loss of a loving husband, father, grandfather, and all-around people person, Greg Schmitt who passed away at his Rio Del Mar home on Tuesday, Jan. 30, 2018.
Greg was born in San Jose, to Dr. Earl O.G. Schmitt and Isabelle (McChrystal) Schmitt. Graduated as Valedictorian of his Bellarmine Preparatory School Class of 1948; later graduating from Stanford University in 1952. He served his country during the Korean War in the U.S. Navy. Stationed in San Diego, he played golf with Gene Littler and Billy Casper. Who knew they would later become famous on the tour?
He was a popular, well-loved and respected property manager for Rancho Del Mar Shopping Center in Aptos for more than 30 years. Greg was a familiar face in the late seventies, eighties, nineties and early this century around the popular center. Earning the respect of the numerous tenants at RDM, he was instrumental in the various improvements of the property and took a personal interest in all the tenants and their staff who worked there, up until his retirement in 2007. From managing the property, Greg could regularly be seen during holiday or rush hour shopping periods, standing in the apexes of Soquel Drive and the parking lot, directing traffic. His charming personality and negotiating talents with people are truly a lost art. He loved his job, and solving problems came naturally to him.
Before Rancho Del Mar, Greg was a competitive salesman at AAA Insurance. Legend has it that Greg once sold a membership card to a Beagle!! Reason? Another agent was closing in for the monthly “Top Salesman”.
A passionate golfer, he was a member of Seascape Men’s Club, and for many years, was a chairman of Little Helpers Celebrity Golf Tournament, which benefited youth and attracted Bay Area sports heroes to participate. Greg attended St. Joseph’s Church in Capitola and as a youth was an altar server at St. Leo Church in San Jose.
Greg is survived by his wife, Nancy Schmitt, his two sons and daughter-in-law, Robert Schmitt (Anna) and their three children, Morgan, Spencer and Liam, his son Dieter Schmitt; his two children Nancy and Greg. Also Greg’s brother John Schmitt and his sister Gretchen Cody. Greg was preceded in death by his step-son Scott Castillo in 2017, who gave Greg three grandsons, David, Nick, and Tom Castillo, and their families.