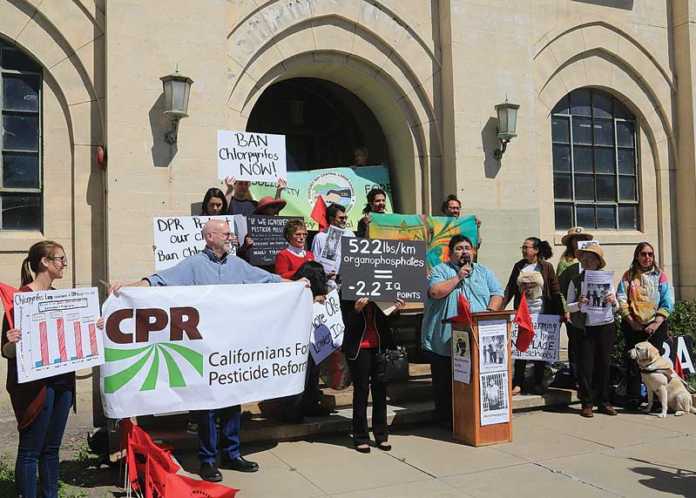 SALINAS — On the steps of the dilapidated jailhouse in which Cesar Chavez was held 47 years ago, a group of pesticide activists held a rally Friday to both celebrate his birthday and to draw attention to an issue that was close to the labor leader’s heart.

Lara said that the gathering could have been a celebration of a ban by the U.S. Environmental Protection Agency of the pesticides known as chlorpyrifos.

But it turned into a rally after the EPA announced late Wednesday that it would not implement its proposed ban of the chemicals.

In November, the EPA called chlorpyrifos unsafe to use in any amount. The agency outlawed home use of chlorpyrifos in 2000.
The activists now hope that Gov. Jerry Brown and the California Department of Pesticide Regulation will help.

“We’re demanding action on a state level because the EPA has refused to take action to ban these toxic pesticides,” said Lucia Calderon of Californians for Pesticide Reform (CPR).
The small band of protesters held signs, beat drums and chanted slogans as pesticide experts and labor leaders spoke of the dangers of chlorpyrifos.

Calderon said that the EPA is refusing to ban or limit the chemicals, despite the agency’s own reports that chlorpyrifos can cause neurological and respiratory damage, developmental delays and IQ loss, even in very small doses.

“Chlorpyrifos continues to have a devastating impact on the children of Monterey County,” said Oscar Ramos, a teacher at Sherwood Elementary and president of the Salinas Elementary Teachers Council. “It’s hard to watch children struggling in the classroom and know that their health and potential have been stolen from them.”

According to CPR, an estimated 1.3 million pounds of the pesticide are used in California every year on more than 80 crops such as almonds, walnuts, oranges, and lemons. That accounts for roughly 20 percent of the nationwide total.

The EPA’s announcement late Wednesday that it would not implement its proposed ban comes after many years of stalling — and pressure from Dow Chemical, the largest manufacturer of the widely used neurotoxic pesticide.

Former EPA scientist Jim Jones, who left the agency in January when President Donald Trump took office, said that the ruling will put farmworkers and children at unnecessary risk.

“They are ignoring the science that is pretty solid,” Jones said.