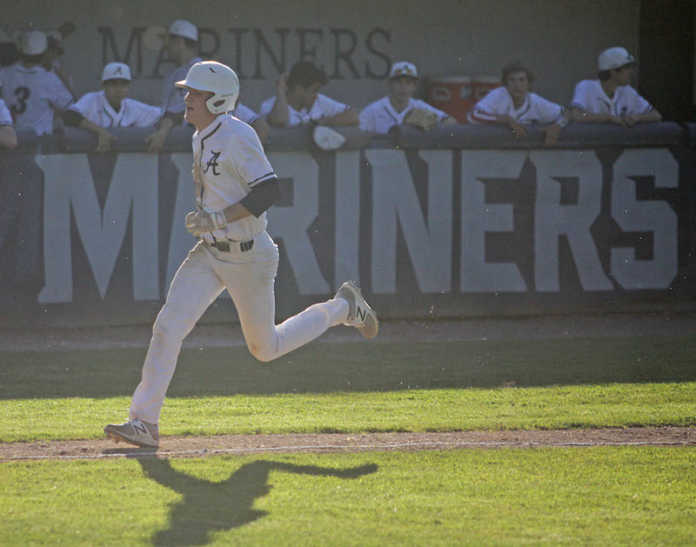 SANTA CRUZ COUNTY — The clock has turned and the crack of the bat has replaced the sounds of raindrops on rooftops.

For many of the local squads getting on the field for practice has been a struggle early. Rain turned diamonds into mushy lagoons, delaying the normal flow of preparations.

But all of that is behind them now and it’s time to play ball.

For the Aptos Mariners, athleticism and depth play a pivotal role for a team that seeks its first Santa Cruz Coast Athletic League championship since 2012.

“We have a very deep team with lots of leadership,” said Aptos head coach Jason Biancardi. “Our lineup is stacked one through nine. They’re fast, they keep the ball in play and play tough defense. The defense is great. If we throw strikes we’re going to be just fine.”

“He’s been an amazing leader out here. He plays shortstop; he plays catcher, he plays centerfield. He plays wherever he needs to play and he’s been very outspoken out here. I wish we had nine of him,” Biancardi said.

Forrest Hays is back after the finish of the basketball season and will work to build on a season where he was named Second Team All-SCCAL.

Several Mariners such as Gavin Glaum, Hays and Stone-Hinds are multi-sport athletes.

Biancardi, an Aptos alumnus, is in his second year as the head coach and will hope to improve on last year’s 6-6 league finish. The Mariners travel to Soquel today at 4 p.m. to start SCCAL play.

“I grew up here,” Biancardi said. “My brothers went here. I have a lot of pride in Aptos.”

The St. Francis Sharks, the two-time defending SCCAL co-champions, are not off to the best of starts. But, there’s a reason why.

As the Sharks’ basketball team goes deeper into the state playoffs, the baseball team is short of three of its key players: slugging first baseman Ruben Ibarra, pitcher and infielder Chase Watkins and utility Joseph Kovacs.

In their absence, Derric Estrada-Haro, Andrew Ciandro and Josh Kovacs have stepped up.

St. Francis head coach Ken Nakagawa is not rooting against the basketball team for a quick return of some of his players.

“We root for them, as a baseball team that’s kind of hard to, but as a fan, we want to see them do well. If they go this far, they might as well win a state title,” said Nakagawa, who is in his eighth year.

Ciandro, a senior right-handed pitcher, is a returning First Team All-SCCAL selection and is the team’s ace. Ciandro will be playing baseball for Cal State Bakersfield next year.

Ibarra, who will be playing baseball at San Jose State next year, is known for his “light-tower power” (as Nakagawa says), but should also be known for his quick feet on defense at first.

Senior outfielder Conor Bagchee was named to the All-SCCAL Second Team last year but is out with an injury. Until he’s healthy, sophomore Andrew Seymour will fill in. Seymour is a speedy centerfielder who hits for contact and has been batting leadoff.

Junior David Talavera was a Second Team All-SCCAL selection last year at shortstop but has moved to the outfield this season. Talavera owns a potent bat and is batting second. Second baseman Mario Velasquez is battling with Seymour for the leadoff spot, which Sahid Valenzuela, who is now starting for powerhouse Cal State Fullerton, owned over the last four years.

So, the Sharks aren’t off to the best start. That doesn’t mean they don’t plan on being competitive.

“Everyone is our rival,” Ciandro said. “Everyone comes to us, so we go after them. We don’t like anybody.”

In the Monterey Bay League Pacific division, the Watsonville Wildcatz, the North Monterey County Condors and the Pajaro Valley Grizzlies will hope to vie for the title.

For Condors’ first-year head coach Alex Rivera, the early season has been a learning experience for everyone.

“I think we got what it takes to do some special things. Rome wasn’t built overnight,” Rivera said.

Rivera has come back to coach his hometown team in Castroville and he hopes to lead them to their first league title since 2005.

The infield, with power hitters at first and third and solid defenders at second and shortstop, figures to be pivotal to the Condors’ success this season.

Shortstop Adrian Soto features a flashy glove and can make outstanding plays with his strong arm despite a lean figure.

Senior first baseman/pitcher Josh Garcia is tough as nails on the mound and off it. He hit his first homer of the season Tuesday against St. Francis. Garcia is also the team’s ace.

Adrian Gonzales is a sophomore righty with a slingshot for an arm.

Senior Ryan Devore at second is another tough, hardnosed player who features a slick glove and a strong arm.

At third, sophomore A.J. Valdez is a young athlete who is coming into his own as a baseball player. Valdez has a good baseball IQ, plays hard and can hit anywhere in the lineup.

Longtime head coach James Gomez’s Wildcatz are off to a solid start.

After winning two out of three games at the Milpitas Michael De Jesus Tournament, the Wildcatz have gone 2-2, including a split series against the Seaside Spartans.

Senior James Gomez Jr. is off to a hot start. Junior Ryan Rivera, senior JoJo Vargas and sophomore Dylan Vargas hope to lead the Wildcatz back to the top of the MBL-P a year after moving down from the Gabilan.

For Pajaro Valley, the season is a work in progress.

The Grizzlies are a young team with several players who are in their first or second year playing baseball. They’ll lean heavily on their returning veterans.

Rocky Ramirez enters his sophomore season after earning honorable mention honors. Ramirez, like many other Grizzlies, will play multiple positions.

Sophomore John Ramos plays first and will pitch when needed. Ramos and Melgoza are playing their second year of baseball this season.

“A lot of our guys are going to end up playing all over the place depending on who is pitching,” said second-year head coach Matt Manfre.

In the MBL’s Gabilan division, the Monte Vista Christian Mustangs are off to a solid start.

Sophomores Ian Koenig and Dominic Felice play infield and catcher, respectively, and have taken on prominent roles for the Mustangs early on.

“They’re a bunch of fighters. They won’t give up,” said Mustangs first-year head coach Case Rigby. “Whether up by five or down three I don’t think it matters to them. They’re just going to keep putting up runs until the game is over.”

Team captain senior Dylan McPhillips is the team’s best athlete and splits time between pitcher and shortstop. McPhillips will be playing college baseball at Sacramento State next season.

“He’s a leader on the team who everyone looks up to and knows he’ll get the job done,” Rigby said.

The Mustangs enjoy depth at pitching with four solid starters and a deep bullpen.

Now that basketball season is finished for the Mustangs, 6-foot-5 juniors outfielder/pitcher Keith Jaffe and catcher/outfielder Garret Laine return to the lineup.

BRYCE STOEPFEL - January 25, 2023
SANTA CRUZ COUNTY—Writer Stephen Kessler has been named the 2023 Artist of the Year by the Santa Cruz County Arts Commission.  Kessler has written a...