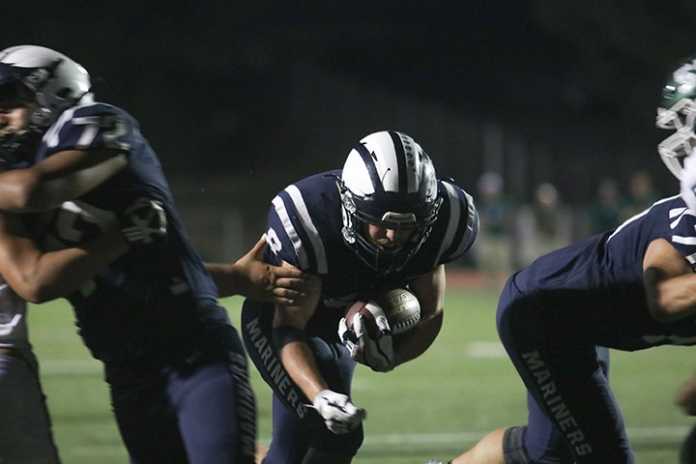 APTOS — The Aptos High football team has had a rough start to the season, dropping its first two games in heartbreaking fashion.

But the Mariners closed out their preseason schedule on a high note with a 35-14 win on Friday against Sacred Heart Cathedral Prep in non-league play.

Senior running back Josh Powell finished with 140 rushing yards and three touchdowns on 12 carries for Aptos (1-2).

Powell credited the offensive line for his success and plans on treating them to a hearty meal for their performance.

“I’m taking them out for pancakes,” Powell said. “Pancake blocks, they get pancakes.”

“I think tonight we brought heart and we realized that we can win,” Forbes said. “We just came out and fought the whole game.”

Aptos coach Randy Blankenship said he was pleased with the offense, which racked up 297 yards rushing on 34 carries and five touchdowns.

“It was nice to see Josh Powell start running like he’s been running the past couple of years,” Blankenship said. “The first couple of games he struggled and I think he was trying too hard.”

Blankenship said other players in the backfield also stepped up.

“It was big,” Blankenship said of getting the first win of the season. “You go into the bye week and at least you have a good taste in your mouth.”

S.H.C. junior quarterback Cian Dowling completed 13-of-23 pass attempts for 93 yards along with a touchdown and an interception. He also finished with 115 yards rushing on 21 carries and a touchdown.

Blankenship mentioned the defense did a much better job in the second half of containing Dowling after a poor display of tackling during the first two quarters.

“(Dowling) is a dual threat,” Blankenship said. “He can run the ball and throw the ball. And he’s accurate. His runs really hurt us.”

Blankenship said consistency has been the big issue this season, so far.

“This has been a tough preseason,” Blankenship said. “I’m glad we got out of here with a win and especially came out in the second half to shut them out.”

Nico Riccabona put an end to a promising drive by the Fighting Irish by intercepting Dowling’s pass attempt in the third quarter.

“It was huge,” said Powell about the turnover. “(S.H.C.) was about to drive and they were feeling themselves.”

The Mariners capitalized on the turnover when Powell scored his third touchdown of the night to put his team ahead 28-14.

Vaughen Holland added another touchdown early in the fourth to seal the deal. He finished with 70 yards on seven carries for Aptos.

Both teams were hit with numerous penalties. The Mariners had eight penalties for 75 yards, while the Fighting Irish also finished with eight for 85 yards.

Next up, Aptos heads into the bye week before starting Pacific Coast Athletic League Gabilan division play Sept. 27 on the road against San Benito at 7:30 p.m.

“[We need to] get healthy and get ready for Hollister because they got a good football team,” Blankenship said.

Editor’s Note: This article will be published in the Sept. 20 edition of The Pajaronian.