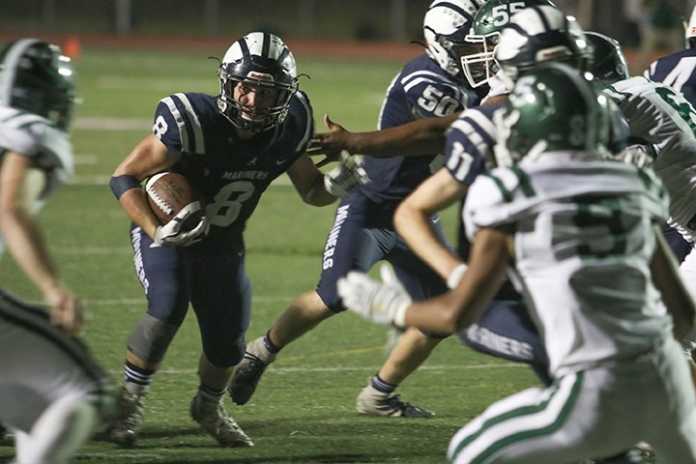 1. Aptos (1-2): The Mariners bounced back with an impressive win at home against Sacred Heart Cathedral Prep and remain at the top of this week’s PV Sports Power Poll.

Josh Powell scored three touchdowns for Aptos and the defense buckled down by shutting out the Fighting Irish in the second half.

The Mariners have a much-needed bye-week to rest some players before heading into Pacific Coast Athletic League Gabilan division play.

2. M.V.C. (1-1): Monte Vista Christian went up against a tough The King’s Academy team that traveled to Mustangs Stadium to steal a win on the road.

The Mustangs looked awesome in their opening drive, which was capped off with a touchdown by running back Quinn Alexander. But the Knights’ defense adjusted, shutting down Alexander and put the pressure on quarterback Nathan Renggli.

Renggli did have some open looks to his receivers but the dropped balls are what killed any momentum, including a crucial dropped pass in the end zone.

3. N.M.C. (2-1): North Monterey County went on the road to battle the heat and a Scotts Valley team that always plays tough at home. But the Condors edged the Falcons as the defense played lights out.

N.M.C. gave up just seven points. Kobe Hatten recorded an interception, while Jayson Mellin forced a fumble and recovered it.

Senior Brandon Ducusin returned to action after serving a one-game suspension but there were no signs of rust. He threw a touchdown, connecting with Cyrus Coffelt on a 16-yard reception, and ran one in from 25 yards out.

The Condors will hit the 101 South to take on Greenfield (0-3) in the teams’ preseason finale. Kickoff is slated for today at 7 p.m.

4. Watsonville (2-1): The Wildcatz received a win by forfeit after their game against St. Francis was canceled with an insufficient number of healthy players heading into the week.

Watsonville will play its preseason finale at home against Burlingame (0-2). The Panthers won last season’s game, 49-7. Watsonville is coming off a “bye-week” and had some extra time to prepare for this game.

The offensive line needs to be explosive and create some holes for a group of talented running backs that can do some damage when there’s an open lane.

The defense can dominate when it wants, but that means players sticking to their assignments to prevent the big play. They have a difficult task ahead of them this week.

The Wildcatz and Panthers square off today at 7:30 p.m. in non-league action.

5. Pajaro Valley (0-3): The Grizzlies have dropped three straight games to begin the season and have been outscored 90-14. It’s just the preseason, but if there’s a time to turn things around it has to be this week.

The offensive needs to stay on the field longer and find some kind of spark, whether it’s from quarterback Kevin Landeros or running backs Carlos Hernandez, Martin Gonzalez and J.J. Briseno.

6. St. Francis (1-2): The Sharks drop a spot because they suffered a loss by forfeit against Watsonville. The game was canceled due to an insufficient number of healthy players heading into last week’s meeting.

St. Francis coach John Ausman said it was the right thing to do, especially with a roster that features just nine juniors and seniors combined.

Still, these guys play with a ton of heart and motivation to win (perhaps a chip on their shoulder?). Up next, the Sharks will go to San Jose to take on The Harker School in non-league play. Kickoff is set for 7 p.m.

St. Francis junior quarterback Davin Avila hopes to have a repeat performance from a win against Yerba Buena where he finished with two touchdown passes. Junior running back Pedro Valencia also saw the end zone twice as he racked up a pair of touchdown runs for the Sharks.