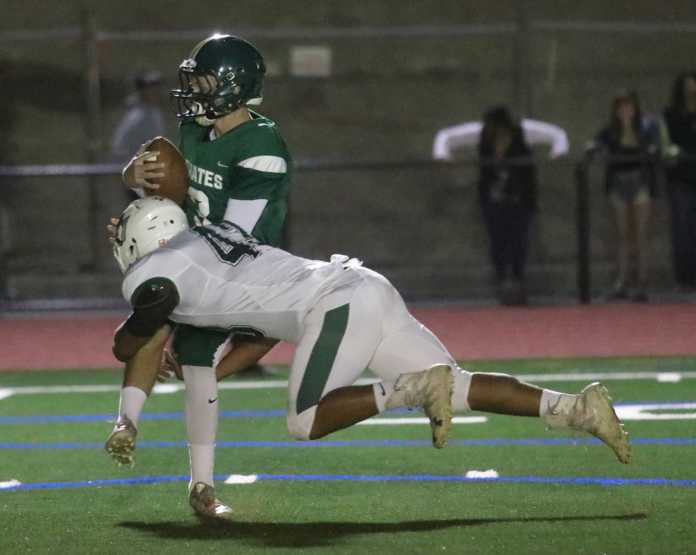 Aptos has qualified for the Central Coast Section playoffs in each of the last eight seasons.

The Mariners can push that streak to nine with a win at Christopher tonight at 7:30 p.m.

A win against the Cougars would secure no worse than a fourth-place finish in the Pacific Coast Athletic League Gabilan division for Aptos (7-0, 4-0), which could also notch its first 8-0 start to a season since 1998.

The Mariners, coached by Randy Blankenship, have rolled through their first four games of league action, outscoring teams 186-40. They’ve allowed just 67 points all season, and are scoring 47.4 points per game.

Christopher (3-4, 1-3), meanwhile, has not won since it beat Seaside on Sept. 22. The Cougars, coached by Tim Pierleoni, last week fell behind Palma 41-0 in the first two quarters before losing 41-13.

Senior receiver Jason Scirigione has been a star despite the team’s struggles. He has made at least 33 receptions for more than 500 yards and seven touchdowns, according to stats kept on MBayPreps.com.

Here is a look at the rest of the week 9 high school football action:

• Watsonville vs Alisal; tonight, 7:30 p.m.: Tonight’s game will be a battle between two teams with CCS playoff aspirations.

Watsonville and Alisal will both enter with a 4-3 overall record, but the Trojans will hold an advantage in the playoff chase with a 2-1 PCAL-Mission record.

The Wildcatz, coached by Ron Myers, are 1-2 in league play after dropping their last two, including last week’s 25-20 heartbreaker against Scotts Valley. But those losses could be ancient history if they win tonight and force their way into a tie for third with the Trojans.

Only the top three teams in the PCAL-M earn an automatic berth to the postseason.

Watsonville and Alisal have been locked in a back-and-forth battle over the last four years. Each team has won two games, though the Trojans made last year’s game a no contest — they won 35-7.

• Pajaro Valley vs Soquel, at Cabrillo College; tonight, 7:30 p.m.: Pajaro Valley has its eyes set on the program record for league wins (3). They’ll have to crack a stout Soquel defense in order to reach that mark.

The Knights (4-3, 2-1), coached by former NFL-er Dwight Lowery, are fresh off a pair of wins over Harbor and Stevenson, and have an outside shot of winning the PCAL-Santa Lucia if they get some help down the road. They can thank their defense for those two victories, as it held Harbor scoreless and Stevenson to just six points in last week’s overtime win.

Pajaro Valley (3-4, 1-2), meanwhile, has been reliant on its offense this fall. The Grizzlies, coached by Kevin Cordova, are averaging 33.3 points per game in league play, and dropped 45 points in last week’s win over Harbor.

Junior running back Carlos Hernandez has rushed for more than 100 yards in each league game, and senior running back Russel Pablo has surpassed the century mark twice. That duo will need to keep trucking if the Grizzlies hope to pull out a win.

Tonight’s meeting will be the third in as many seasons. Soquel won last year’s game, 30-24, to avenge a 31-28 loss from the year before.

• St. Francis vs Santa Cruz; tonight at 7:30 p.m.: St. Francis and Santa Cruz will be happy to be back on the field after both were held scoreless last week.

The Sharks (4-3, 1-2) lost 34-0 to San Lorenzo Valley, while Santa Cruz (1-6, 0-3) lost 21-0 to North Monterey County. Both teams might be out of the PCAL-Cypress title chase, but that doesn’t mean tonight’s meeting in Watsonville will be drained of excitement.

It will be a rematch of last year’s 21-14 slugfest that forced the two teams to share the Mission Trail Athletic League Coastal division title.

Santa Cruz has struggled to score since the beginning of league play. The Cardinals, coached by Bubba Trumbull, are averaging seven points per PCAL-C game, and have only scored more than 20 points in one game this season — a 42-7 preseason win over Fremont of Sunnyvale.

St. Francis has had similar troubles in league action. The Sharks, coached by John Ausman, scored 56 points against Pacific Grove, but were held to seven points in a loss to King City in their league opener on Sept. 28 before being shut out last week.

St. Francis senior Andrew Seymour ran for negative yardage against S.L.V., but made his impact on defense with a pair of interceptions. He is one shy of Zack Saucedo’s program record for most interceptions in a single season (7), and three shy of Saucedo’s career interception record (14).

• M.V.C. at Monrovia; Saturday at 1 p.m.: Monte Vista Christian is back on track after winning three of its last four games.

Wildcats junior quarterback Nicholas Hernandez will look to wreak havoc through the air. Through eight games, he has completed 68 percent of his passes for 1,255 yards and 17 touchdowns to just one interception.

The good news for the Mustangs? Their defensive backfield has been one of the best in the Monterey Bay this season, holding every quarterback they’ve faced to 200 yards passing or less.

M.V.C.’s offense has also started to take shape since the start of league play. Last week’s 21-point performance against Alisal improved the Mustangs’ points per PCAL-Mission game to 22.8 points.

R-P STAFF REPORT - January 25, 2023
SANTA CRUZ COUNTY—Writer Stephen Kessler has been named the 2023 Artist of the Year by the Santa Cruz County Arts Commission.  Kessler has written a...