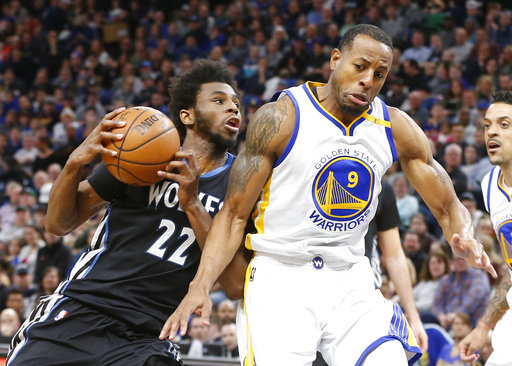 OAKLAND — Golden State Warriors forward Andre Iguodala was fined $10,000 by the NBA on Monday for what the league called “inappropriate comments” following the team’s weekend loss at Minnesota.

The NBA announced the penalty shortly after Iguodala spoke to the media following practice and addressed the racially tinged comments he made Friday night.

Iguodala acknowledged he put his team in a tough spot when he told reporters “I do what master say” upon finding out that he would be resting the next night at San Antonio, along with Stephen Curry, Draymond Green and Klay Thompson.

He made it clear that he and Golden State coach Steve Kerr are just fine — and that Kerr wasn’t the “master” in this case, one that sure sounded like a reference to slavery. He also used the N-word several times when talking to the media.

“It was probably the wrong time to express myself, but we all have our own opinions, we all have our own feelings,” said Iguodala, the 2015 NBA Finals MVP. ” … Because some may not understand where you’re coming from, which is to be expected. I feel like it’s the wrong time because it puts my team in that situation and the coaching staff in that situation. I have a great relationship with Steve Kerr and he knows that. He spoke to you guys about it. Someone may still not believe him. But he and I are in a great place. We don’t even have to speak about it because he knew that in no way, shape or form was I talking about him.”

Still, after Monday’s practice, Iguodala and Kerr had a long chat on the court — smiles and laughs were witnessed — and Iguodala also spoke with Warriors general manager Bob Myers.

“Well first of all, he wasn’t talking about me, for the record,” Kerr said. “He and I have talked and that’ll remain private. I wasn’t the slighted bit offended. As I mentioned the other night, he’s got a very cryptic sense of humor. The only thing I would say is there are certain humorous things you should say in the sanctity of the locker room and certain humorous things you might want to keep from the media, and that was one of them, and he knows that.”

Iguodala played golf during the off day Sunday and said he probably offended someone by doing that instead of resting his body.

“You kind of live in a world right now where our team’s so much in the spotlight and there’s such a microscope on us as players that any given move can offend someone,” he said. “So you can’t live life trying not to offend anyone, you just can’t live like that. … The year we won a championship, I think golf was our ally.”

Iguodala hinted he might have been referring to the constant media attention surrounding the Warriors. He mentioned having a “conversation with a group every single day and they thrust themselves so much into your lives it’s almost as like you have a robotic type of mindset.”

“You speak upon this same routine, this kind of grind,” he said. “It may not have been the right time or the place to speak on it, but it doesn’t change the way that someone may feel and that’s what everyone has to respect.”

Back home after eight games in 13 days that included two cross-country trips and one to the Midwest and Texas, the Warriors have lost three straight regular-season games for the first time since Nov. 20-23, 2013. They played an NBA-record 297 consecutive games without dropping three in a row.

“This is going to sound crazy, (but) I kind of like it,” Kerr said. “I think you need some adversity. We obviously have some, probably for the first time in 2½ years in terms of the regular season.”

NOTES: Injured star Kevin Durant was without a brace on his sprained left knee, though he isn’t scheduled to be re-evaluated for a couple more weeks to determine if he might return before the regular season ends. “He’s progressing and getting on the bike and that kind of stuff,” Kerr said. “He told me he’s feeling really good.”