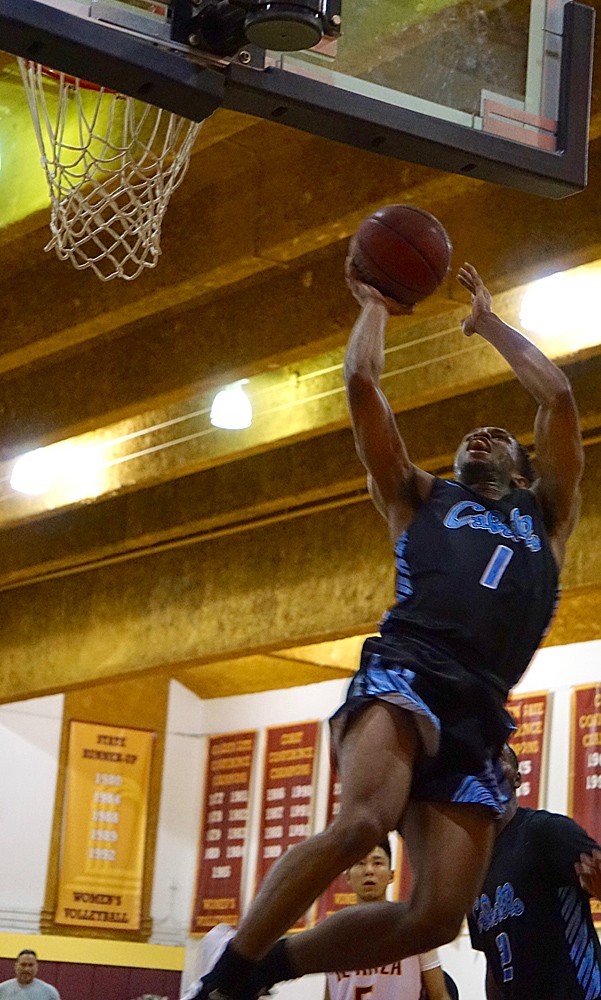 The Dons showcased their obscene range to pick apart the Cabrillo zone defense for 10 3-pointers in the first half.

Unlike in last week’s loss to Gavilan, Cabrillo (15-5, 4-1) responded by switching to man-to-man defense, and playing long stretches with a three-guard look.

“Sometimes you just grind out a win,” said Cabrillo coach Tony Marcopulos. “We played man and tried to disguise it, but they figured it out. It was plan D. Sometimes you have to go to plan D… We played small with Yeskin (Williams) at the five, which frankly we haven’t really practiced very much.”

The CCCMBCA released its Jan. 22 poll with Cabrillo ranked No. 14 overall in the state and No. 5 in NorCal. When faced with opposition early, the Seahawks looked like a top-ranked team responding with deft adaptability and selfless ball movement.

Sophomore Trey Whitley led the Seahawks in scoring yet again with 23 points. Whitley almost single handedly kept his team in the game during the Dons’ early run, draining four of his five 3s in the first half.

Williams, a sophomore forward from Pearland, Texas, led all players in rebounds (12) and assists (6) on a night in which he scored 17 points on 7-of-11 shooting from the field.

Cabrillo continues its season on Jan. 30 at home against West Valley College.

• Cabrillo 69, MPC 58 – The Seahawks survived at home against one of the most challenging physical teams they have face so far this season on Jan 18.

Whitley had a game-high 21 points including two dagger 3’s in the closing minutes to seal the win against the Lobos.

• Cabrillo 84, De Anza 40 – Four Seahawks scored in double digits in the 44-point blow out of the hosting Dons on Wednesday night in Cupertino.

Sophomore Heleyna Hill scored a game-high 23 points, and freshman Veronica Johnson had 13 in her return to Cabrillo’s (13-3, 6-0) lineup.

• Cabrillo 87, Monterey Peninsula 56 – Three Seahawks registered double-doubles in the rout of the visiting Lobos on Jan. 18.