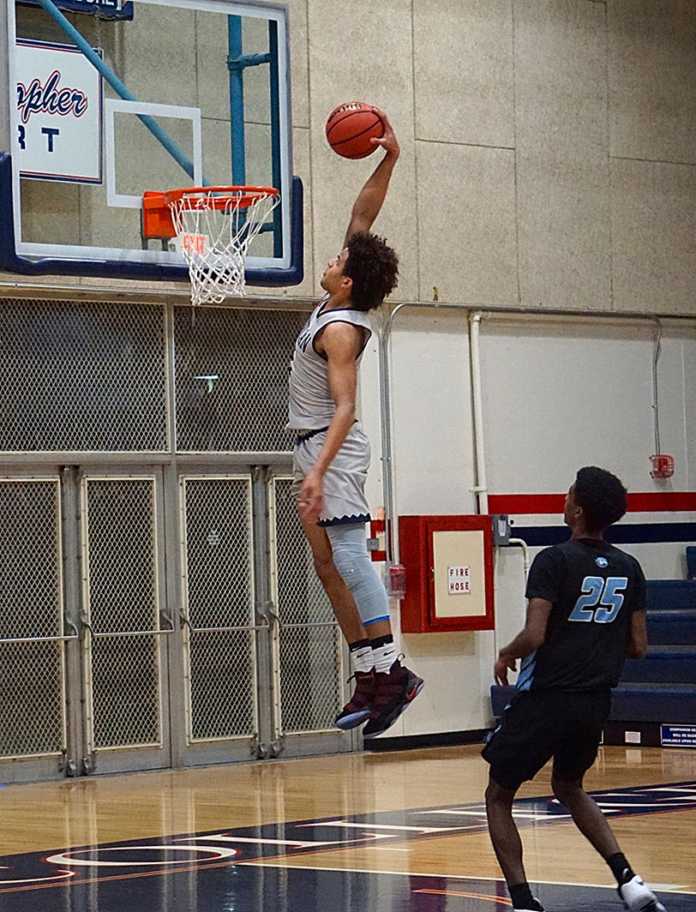 The Cabrillo College men’s basketball team saw its chances of capturing at least a share of its 13th consecutive Coast Conference South title wash away with the El Nino storms following a 62-46 loss to host Gavilan College in Gilroy on Feb. 8.

The lead would prove insurmountable.

When the final horn sounded, a well-attended Rams’ crowd celebrated taking one step closer toward the school’s first outright conference championship since 1969.

Gavilan second year coach Dallas Jensen’s adjustments at the break constricted Cabrillo’s title aspirations, as the Seahawks were only able to muster 19 points in the second half.

High flying 6-foot-7 sophomore forward Xander Bowers, a Gilroy native who joined Gavilan when Jensen got the coaching position, seemed to spend most of the game above the rim in one capacity or another. Bowers finished the night with 13 points, six rebounds, two blocks, a steal and an assist.

The Rams must now take care of business as they wrap up conference play this coming week.

The Seahawks will close out their home conference schedule tonight in the Adobe Palace against the De Anza College Dons (9-16, 1-8).

Tip off is scheduled for 7 p.m.

Wednesday night’s contest against Monterey Peninsula College (11-14, 5-4) was rescheduled to Feb. 18 due to power loss on the M.P.C. campus.

In other junior college action from Feb. 7-13:

• Cabrillo 87, Gavilan 48 – The Seahawks took a total of 109 shots from the field on Feb. 8 in Gilroy, as three Cabrillo starters finished with double-digit points in the CC-South victory.

Sophomore Heleyna Hill led all players in scoring by dropping 30-plus points (34) for the third time this season.

The Seahawks will close out their home conference schedule tonight in the Adobe Palace against De Anza College (4-17, 3-7).

Tip-off is scheduled for 5 p.m.

• Cabrillo goes through whirlwind – Feb. 8 was brutal for the Seahawks (4-3), as they played three games in six hours against two different opponents in two different towns.

Sierra College (6-1) handed Cabrillo its first loss of the year with a nine-run, shutout in Rocklin, but the Seahawks came storming back in the afternoon doubleheader against host Folsom Lake College (2-6), outscoring their opponents by a combined score of 28-6.

The College of the Sequoias (2-5) and Delta College (5-0) shut out the Seahawks on Monday outscoring them by a combined 19-0.

The compacting of multiple games against different opponents on the same day were an unavoidable byproduct of the adverse weather occurring this spring, forcing many games to be pushed back to later dates.

Cabrillo will travel to Butte College on Saturday for two games. The Seahawks play Butte at 10 a.m. and Santa Rosa at noon.

After losing Game 1 by six runs despite jumping out to a four-run lead in the first inning, Cabrillo recovered in Game 2 with back-to-back home runs from middle infielder Jonah Shabry and sophomore designated hitter Joey Miranda in the fifth inning.

Shabry’s home run was of the Grand Slam variety — his first at the college level.