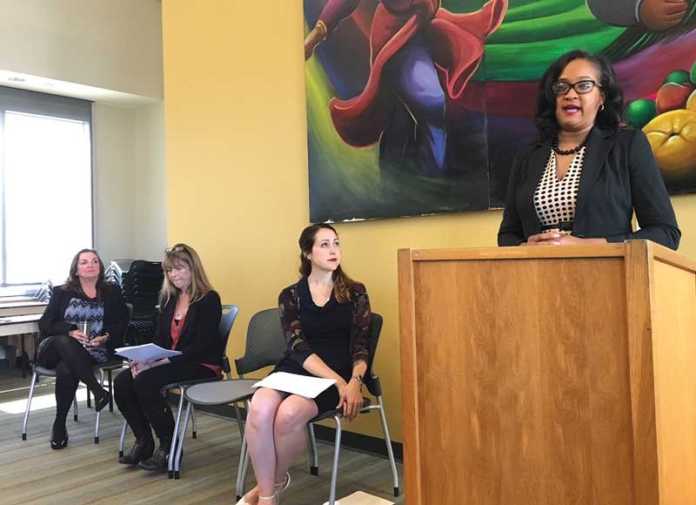 WATSONVILLE — A group of community members came together late Tuesday morning at the Watsonville Public Library to discuss the state of health in Santa Cruz County.

The United Way of Santa Cruz County and Applied Survey Research (ASR) hosted the conference, which was held to promote National Public Health Week. Speakers from both organizations as well as First 5 Santa Cruz County spoke about their partnership with the County Health Rankings & Roadmaps program.

Susan Brutschy of Applied Survey Research explained how County Health Rankings and Roadmaps has helped paint a broader picture of the triumphs and shortcomings of health in Santa Cruz County. Every year, the rankings seek to provide snapshots of the state of health in areas all over the U.S.

ASR General Manager Michelle Luedtke reported data to the crowd, and went on to explain the idea of “health equity,” one of the ranking’s main focuses.

“While ‘equality’ means that everyone should have the same thing, ‘equity’ recognizes that resources and opportunities aren’t uniformly available,” Luedtke said.

Out of 57 counties ranked in California, Santa Cruz County ranked 16 in Health Outcomes (longevity and quality of life) and 13 in Health Factors (behaviors, clinical care, environment, economic). It also came below the violent crime rate percentage for the state.

However, the county’s percentage of alcohol impaired driving deaths, drug overdose and injury deaths of 35 percent all exceed state findings of 25 percent.

Children and youth were a big subject at Tuesday’s meeting, with a speech by First 5 of Santa Cruz County’s Vicki Boriack touching on the importance of quality pre-natal care and the county’s issues with low birth weights and teenage pregnancy.

Keisha Frost, CEO of the United Way of Santa Cruz County, addressed poverty issues in the area. According to Frost, a recent study revealed that 3 in 20 children in Santa Cruz County were living in poverty, with 5 in 20 of them being children of color.

“While there are organizations here doing some excellent work, there are plenty of missed opportunities,” Frost said. “We have been given a chance to set a new course. We need to ask ourselves, ‘How can we change these odds?’”

County Health Rankings & Roadmaps is a program created by the Robert Wood Johnson Foundation and the University of Wisconsin Population Health Institute. According to Brutschy, the program is a powerful tool that local organizations hope to continue using in the future.

“Santa Cruz is not a large county,” she said. “We must work together, to do whatever we can to achieve health and well-being for all.”

To view the full list of rankings for Santa Cruz County, visit countyhealthrankings.org.